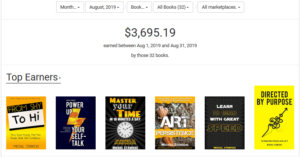 I started August 2019 with a sick feeling in my stomach. For the whole first day of the month, I was calculating my customers’ disappointing results. They were horrible across the board. Till that moment, I relied on the AMS sales data, and they indicated that the ads were in the red or barely making any profit.

Then, I got the results from my three customers who share their whole royalties with me. I resurrected their books, so they attribute all their sales to my ads.

And all of them had positive results, as usual. Then a lightbulb went off in my head: in July, the AMS reporting had gone from wonky to worthless. I checked on my own ads and sales. Sure enough, my July results were better than the June results. I recalled my new customer’s story—she’d dramatically increased her sales with my ads in July despite AMS saying they were deep in the red.

I notified all my customers about the situation and requested to switch to profit calculations based not on the AMS data but on their KDP data. They responded cordially. Some had their reservations, but in the end, all of them agreed to share what their royalties were. For some, where the calculations were pretty complicated due to the fact that they also ran their own ads and used other marketing venues, we paused their ads for part of August to get a clue as to how many sales were the effect of my ads.

Wow, my relief was huge! I didn’t even realize how this whole situation had stressed me out. I was glad my ads were still providing value to my customers.

The AMS part of my income got hit. I postponed accounting with several customers with complicated situations. I waited for them to deliver past royalty reports, so I could figure out the baseline for profits calculations.

I made up for this by issuing a couple of invoices. One was to a new customer who agreed to a flat fee based on the number of campaigns I was running for her; another one was for a book launch that I helped with.

This book launch went better than I’d expected. It was a business book. In two weeks, we generated 1,540 clicks and the ads appeared actually profitable in the end, despite using 2–4 times higher bids than I usually utilized.

Both deals weren’t making me rich, but they generated a healthy profit. I was able to pay my team for creating ads, pay taxes, and get some bucks into my pocket.

Further into the month, the past royalty reports from my customers started trickling in. I got busy determining my customers’ baselines. The first data files I got were distorted by a couple of BookBub deals my customers had. It took some acrobatic calculations to extract meaningful data. Actually, it was fun for me. I love crunching numbers and playing with them. But it took me a few solid hours. I was a bit scared of the scope of the job—I had a dozen more customers to process!

Luckily, only a few customers had such complicated cases. For most, it was enough to calculate the averages from the past before and after working with me to get the idea of my ads’ performance.

For my customers, who didn’t use any other marketing venues, the difference was striking. For example, one Australian author had been making $84 per month in royalties across all the markets before she hired me. She made $680 in July directly from her book sales. In 2019, she never made less than $260 per month of pure profit.

The more customers’ data I crunched, the more vivid the picture was. So, for the customers with disrupted data, the picture should be similar, even though I couldn’t see it clearly.

Anyway, data crunching consumed practically the whole of August. I fought to stay afloat and for most of the time I felt like drowning. The exception was the last week, when I finally calculated results for my all customers, notified them about the change in process, and eagerly waited for the beginning of September.

The success of the giveaway made me immediately join the 99-cent promo run organized in September by the same guy.

We were making painfully slow progress with our book. Jeannie delivered the manuscript, and I noticed that we have ten stories that weren’t authorized by Quora users. We had to replace them with another set.

At the end of August, we had a conference call and we agreed to continue to work on the content. We also mapped out a few further steps, like edition or cover design.

Apart from business perturbations, I had my (un)fair share of life events. One day, I broke my wife’s bike on a ride. I had to deliver it to the repair shop. Another time, I noticed a flat tire on my wife’s car. I’d borrowed it the night before and had driven on a rough dirt road. So I spent a couple of hours installing a spare and then fixing the tire at a car mechanic.

Another day, the engine of my wife’s car started to cough. An orange engine-control light lit up. I visited a couple of car mechanics before they found a trivial problem—one of the cables from the engine’s wiring had come loose.

I won’t even mention the “urgent” house stuff I needed to do, like moving a bookshelf in my daughter’s room “right now!”

Plus, I had some shoulder rehabilitation sessions and had to travel to the capital more often than usual.

At the end of July my accountability partner, who is a fitness nut, challenged me to take regular walks. He was concerned about my mental state; how I was constantly on the go, busy, and frustrated; and thought I could use some physical activity. I was like: “I don’t have time for this bullshit.”

But I took the challenge and in August I was out there every single day. I quickly noticed he was right about a few things. I still kept up my morning exercises, but they were nowhere near my insane HIIT levels from the past. I had to spare my shoulders. I led so sedentary a life that the first thirty-minute walks were a challenge for me.

I introduced some variety: I was cycling and I visited a sauna a couple of times. I found that an additional thirty minutes of physical activity didn’t kill my productivity. Well, Wednesdays were a problem. I was back from my day job at 5 p.m. and had my church community meeting at 7 p.m. I could work only in the morning and for less than an hour in the afternoon. But apart from Wednesdays, I was doing fine.

I found more time for prayer and phone calls. I had a couple of long conversations with my friend who was going through a very tough time. However, in at least fifty percent of cases, I had no agenda for my walks or bike rides. I did nothing and thought random thoughts.

My accountability partner was on to something. I had a couple of minor breakthroughs once I started walking (for example, the discovery that the AMS sales data is worthless). Well, I also felt like I was finally doing something for my health and burned some additional calories.

Overall, it was a very good month. The trouble with the AMS data forced me to get in closer contact with my customers. It also validated my gut feeling that my ads are doing more good for my customers than the advertising dashboard had been showing. In the end, I gained more confidence in my service and got rewarded even more for my work.