Recently, I was browsing through the Creative Commons pictures on Flickr (those that have been given permission to be shared freely) and I came across a few pictures that actually reminded me of my early professional years. 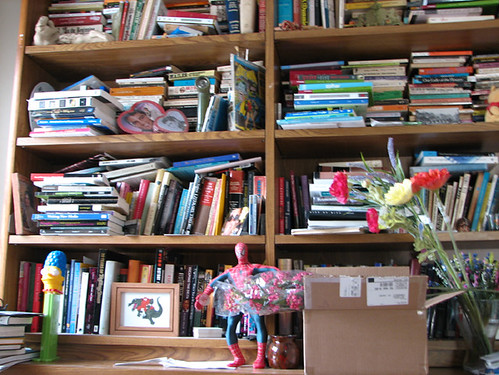 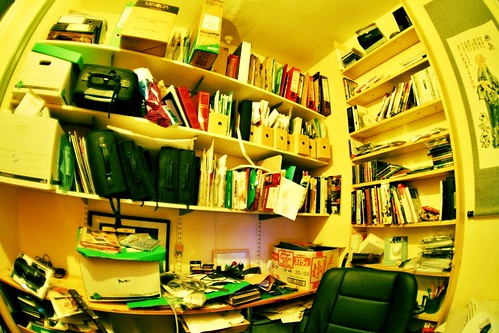 I see several things when I look at these pictures.

I also see a lot of money devoted to things. At the same time, it takes only a quick glance at a shelf full of items to recognize that there’s often a lot of money tied up in those items. A large collection of anything not only had a great deal of cost invested in assembling it, but also has a great deal of cost tied up in merely sitting there. If a person has overstuffed shelves but is also facing financial trouble, there’s a direct conflict going on.

I also see a difficulty in organization brought on by having so many things. When I see an overstuffed shelf or a room full of stuff, I usually wonder how easy it can be to find the item you need when you need it. It’s often buried under mountains of items or filed away on long shelves, meaning that when you have the desire to enjoy one of the items, you have to invest some time in actually finding that item.

I also see a lot of items left unused because of the sheer number of items. Another thing that I notice is that if a person has a lot of things, he or she can only devote a progressively smaller sliver of time to each of those things. That means the cost per hour of enjoyment of each item goes way up.

Think of it this way. Compare a person who has 10 DVDs to one who has a thousand. The person with ten DVDs can watch those DVDs at their leisure, has likely enjoyed all of them multiple times, and doesn’t have to devote much effort at all to storing them. On the other hand, the person with the giant DVD collection has to devote significant time to organizing the collection, likely has not enjoyed his or her collection (many were likely watched only once, some not at all, perhaps), and has to devote significant time, cost, and space into storing them.

This is where libraries and other “borrowing” mechanisms come into play. If you’re unsure as to whether something is going to have significant repeat value for you, borrow that item. Your cost for enjoying the item is then very cheap – nothing if you use a library, or a buck or two if you use a rental service. There’s also no storage cost or effort involved, plus you retain access to a very large library of options.

But what about the “good feeling” of having a lot of stuff? For many, it feels good to have a lot of things. I know that, for a long time, I felt that exact same way. I was very proud of the media collection I had assembled, and I was quite willing to show it off to anyone and everyone.

What I eventually learned was that clutter is the enemy of good personal finance habits. It encouraged me to continually sink my money into items that would simply add to the clutter, and thus my actual cost per bit of enjoyment from those items went up significantly. The end result was a painful financial situation – and the best route of escape from it that I found was getting rid of at least some of the clutter.

If you live in a cluttered environment, take a serious look around and ask yourself whether the clutter is giving you real “bang for the buck” in your life. If it’s not, consider taking a new approach to things.

This has been a guest post from Trent Hamm who writes about personal finance at The Simple Dollar. Please visit his blog for even more articles like this one.