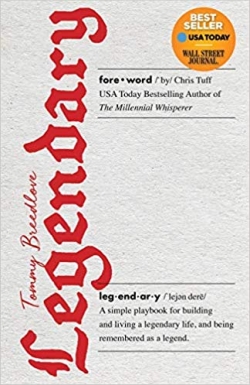 I have so many issues with this book. Not because it’s bad. Rather, I know it could be so much better.

So, I found numerous CONS and, as usual, will share them first. It doesn’t change the fact that Legendary is a very valuable book. Read my review till the end and you discover even more, and better, PROS of this book.

1. Not Enough of Tommy’s Story

His story is heartbreaking on so many levels. The author of Legendary had a truly difficult start in life. He also boldly shares some of his darkest ‘secrets’. You know, the ones we usually share only with closest friends because we are afraid of sharing them with anyone else will cause them to think less of us.

But it’s not the whole story. I don’t know the full story of this man, but I know there was more than in the book. I know folks who got to know the whole story and they were moved to their core. Every single one of them.

Of course, it’s the author’s decision to reveal as much as he thinks relevant/appropriate/helpful. But I’ve seen the effect of sharing all of Tommy’s struggles with the audience and I felt he could do better than he has done with Legendary in this aspect.

Unfortunately, this is a common affliction of personal development books.

A reader is showered with so many great tips, advice, tactics, and techniques that it’s easy to get paralyzed by this multitude. Also, I couldn’t find a clear pattern of what should go first and what to use next. Which brings me to Con #3…

I’m a self-help junkie. I knew most of the methods and techniques enumerated by Tommy. And I noticed shortcuts at least a few times.

The author wanted to cover too much too quickly and sometimes he skimmed over the actual minutia of implementation.

One example: personal mission statement. I wrote a tiny booklet on how to write one (46 pages of content). Tommy wrote one chapter.

Another example: when talking about the importance of habits Tommy speculates it takes from 21 to 60 days (nope, it doesn’t; it’s 66 days on average) and mentions unspecified “studies”.

Going further with the personal mission statement example – I wrote my book less than half a year after I went through the process for the first time. Tommy waited about a decade before he wrote Legendary. And it feels.

He skims over details because he mastered this whole stuff to the point that he doesn’t even consciously realize half of the things he knows. Thus, the overwhelming number of techniques. Thus, omitting some crucial details. He thinks they are obvious to the point he doesn’t notice them. And he didn’t put them into his book.

Do you feel like Legendary is a piece of junk written by an ivory tower guru after reading the CONS? Think twice. It’s a great book. Let’s dive into its greatness.

I could criticize Legendary because Tommy wrote a book and published it. So many people accumulated wonderful experience, but never bother to share it with others in the form of a book.

So, yes, this book has some shortcomings, but nothing is perfect in this world. Maybe it was too late, but it finally happened. Tommy turned his life around. Then, he documented his journey and shared it with us, so we can become legendary too.

Maybe it’s not a full story, but Tommy was vulnerable to the highest level. His story is brutal. In today’s world of shiny social media feeds, it’s more than enough to create a sobering shock.

If anything can get you out of complacency of the rat race, his story can do that. Tommy went over and above what was necessary to paint the painful picture of his internal misery despite the external success he enjoyed.

I’ll say a few words about this in my summary, too.

Tommy is not an ordinary guy. Not many of us had a childhood as traumatic as his. Not many of us spent their sentence in prison, attended a prestigious university, or were partners in the multi-million financial company.

You don’t even need a supportive spouse. Tommy’s wife is a saint. My wife isn’t

She was very clear and blunt about my attempts to transform my life. She didn’t understand it, she didn’t feel we needed it. In the beginning, she didn’t support it at all.

I persisted in my personal development journey, using the exact methods Tommy recommends: gratitude journaling, a personal mission statement, journaling, meditation and so on. They worked. They will work for you too.

Tommy had worldly success marked off the list. He earned in the financial company in a year probably more than I earned in my 40-year life. He changed because he suffered from an existential void. He strived to give a meaning to his life.

Plenty of us wander aimlessly without purpose AND we struggle to make a living at the same time.

But the methods the author prescribes will give you success too. And significance. Also, it won’t be a bonus to your success, they go hand in hand. In the last several years I almost tripled my income, wrote books, started new ventures, but I was starting from a level of about $35,000 a year.

I worked hard to create some financial stability next to emotional, spiritual, health and other areas of my life using the exact methods you will find in Legendary.

Along the way, I experienced more significance than ever before. New friendships. New connections. People I helped. Readers thanking me for changing their lives.

Tommy Breedlove knows how to put you on the right path to both success and significance.

Usually, self-help books, especially traditionally published are quite bland. They avoid any ‘sensitive’ topics and try to be as politically correct as possible. In the effect, they lose their edge altogether.

It’s not so with Legendary. This book has a great, very personal, writing style. Definitely, Legendary is not boring. It’s bold and achieves the right level of sensitivity not by avoiding tough subjects, but with the author’s vulnerability. Tommy doesn’t judge. He just tells his story.

It’s not the usual bland self-help mishmash. Or rather, the content is almost the same, but Tommy’s personal approach makes it readable and inspiring.

And it’s pretty darn quotable. I highlighted plenty of sections and sentences in the book.

There is nothing new under the sun, said Qoheleth over 25 centuries ago. I could barely find anything I haven’t already known in Legendary.

However, repetition is the mother of learning. Even if you have been studying personal development for decades, this book is worth reading for Tommy’s story alone. His story demonstrates that you can be broken inside and heal. You can hate yourself and forgive.

You can always rebuild yourself. You can become legendary.

If you haven’t studied personal development for decades, you will find plenty of useful tips and techniques to heal, forgive, transform and succeed.