Plus a rule of thumb to get there

In January 2021, I checked the Huawei smart band app on my phone. I peeked into ‘Achievements,’ and I saw I was in the top 2% of people using the band. Well, in one category, but I imagine it’s a crucial one for the fit bands users: daily step count.

It’s quite a feat. I did a quick research. I found a number of 5.7 million Huawei smart bands sold. Which means I beat over 5.5 million people. And it took me a meager 10 months to do that. How come?

The “Secret” Behind Success

The answer is simple: consistency. It seems it’s not a secret at all. Successful people were pointing out that persistence is a key to success since the dawn of history. I would say, it’s a prerequisite of success. It doesn’t give any guarantees, but its opposite gives a guarantee of failure. If you give up, you won’t succeed.

So, why is this secret, kept in plain view, still a secret? Why was I in the top 2% of millions of walkers using the Huawei smart band? Why was it so frickin’ easy for me?

This answer is obvious too. Consistency is not flashy. It’s not sexy. You don’t see headlines with the words “perseverance, consistency, persistence, grit” very often.

In fact, for years I’ve been doing a Google experiment: I’m typing two words into the search bar: perseverance and success. And year after year, the results are the same. For every single result for “perseverance,” there are about 20 results for “success.”

So, it’s a widely known fact – persistence is a key to success. But clearly not many are following this common knowledge. It’s still a secret for most.

Back to the Being in the Top 2%

The most mind-blowing thing is that in those 10+ months with the smart band, I was never higher than 76% among all the users in any given month.

In fact, I was a few times below 50%. Well, I’m a number freak, so it hit me like a ton of bricks. If you are more of a human and less of a nerd, here is the visualization of my walking achievements: 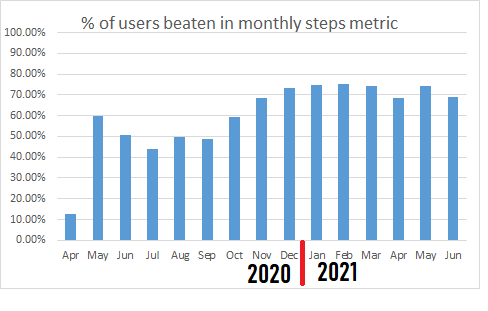 Compare it to the cumulative achievement: 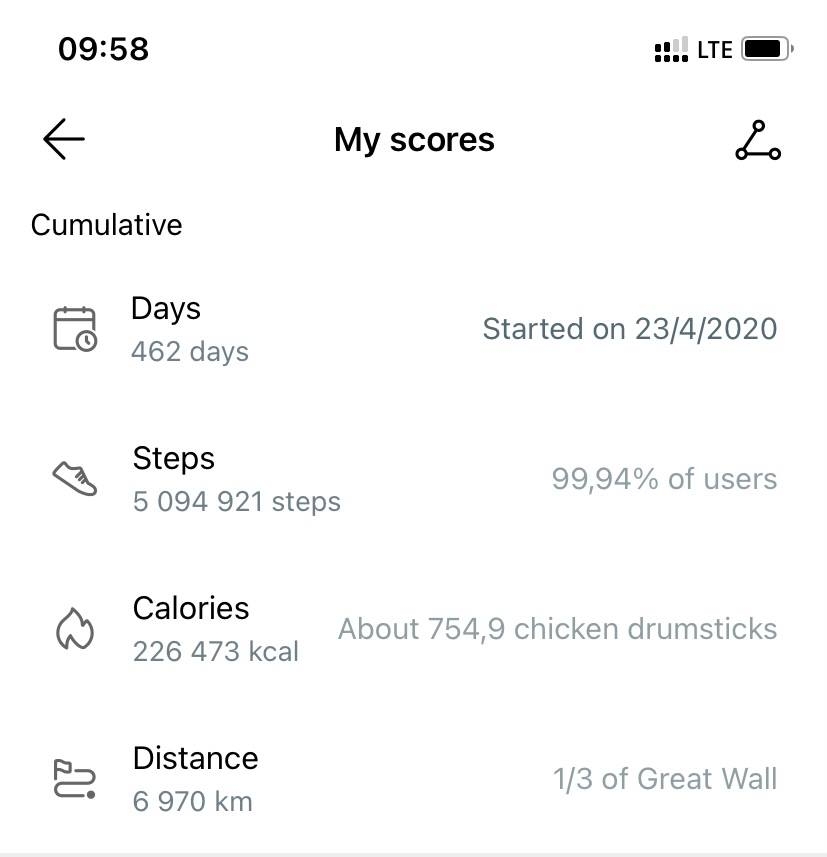 Does it hit you now? Does it blow your mind? How come I was moderate to good and I ended up excellent?

Excellence is not an act but a habit.

I was better than 44% of users one month, 75% another month. But it seems those who were better than me were hares. (If you don’t know The Tortoise and the Hare fable, catch up.)

Plenty of people can beat my step count in a given month. Month over month, more than 1,400,000 people walked more than I. But most of the time, they were different people. And they lacked consistency.

They made 400,000 steps one month and quit walking. Or quit it at that level of intensity. So, I was better than them the next month. On the cumulative scale, I beat them very quickly.

So, What Is the Secret to Success?

I already told this on this blog and in my books. Show up.

“Eighty percent of success is showing up.”
― Woody Allen

It’s enough to be consistently OK to become excellent. Why? Because the bar is set so low. Those hares have no chances against a steadfast tortoise. They are outclassed by an order of magnitude.

I didn’t track this step-count metric very closely, but I recall noticing after a few months, when my monthly result was around 50% (usually below that), that I’m at the top 20% of users. I beat over 80% of all users just by being consistently in the middle of the pack.

Show up. That’s the secret to success in anything in life.

Why Is It so Easy?

Simple: people don’t show up consistently over time. They may show up once or twice, or for a week, maybe even for a couple of months. Then, their dedication expires and they are gone. Anyone who shows up is better than them.

Our monkey brain is wired for anything new and negative. Some claim this is the evolutionary effect of looking out for dangers. Maybe. But it is a fact no matter what reason is behind this mechanism.

It is especially tempting nowadays to chase those shiny objects. Social media feeds are full of novelty. Media are full of negativity. Your inner monkey has all it needs to run in perpetual circles. And you stuff your life in between, from time to time.

However, if you can quiet down the monkey, and let the human take the driving wheel, biology is your ally.

We naturally excel in everything we regularly do. That’s how our brains are wired. The neural circuits which are frequently used grow and strengthen. Myelin is covering those circuits and it grows thicker too. All neural signals are transmitted faster and stronger thanks to this substance.

Practice makes master. Practice, and whatever you do will become easier the next time around. Practice consistently and this discipline will become seemingly effortless.

Time is the ultimate club to beat down the competition. It’s a lever. Long enough leverage can move the whole Earth.

“Give me a lever long enough and a fulcrum on which to place it, and I shall move the world.”

Show up. Practice. Your lever will increase its length.

Others may be more talented, more intelligent, tougher, stronger, may have better connections. But it means nothing, if they don’t consistently show up. Their lever is not getting longer.

Yours? It gets longer every time you show up. Your victory is just a matter of time.

I shared this story in The Art of Persistence:

I’d been third to last on the list of students admitted in my first year at university. But by the fourth year, I was among the top 25% of students and I got a scholarship. I didn’t really know how I achieved that. I certainly wasn’t among the brightest. I didn’t study the hardest, as I had no time to do so, having two children.

But I showed up. I attended almost every lecture and took notes. This simple discipline allowed me to be better than 75% of my peers. Basic and effective. Nothing more.

It works in business. Tony Stubblebine tells a story on how his business survived despite juggernaut, venture-capital funded competition here:

It was enough to outlast the competition.

Supposedly, most of the books don’t sell even 500 copies in their lifetime. Each and every book of mine sold more than that.

My last few books sold over 500 copies in their first month since publication date.

Don’t give up. Don’t stop. Don’t be inconsistent. Keep going at a decent level. Not the superhuman, top 1% level. It’s enough to be regularly in the top 70% to advance to the top 1%. Day in, day out. Week in, week out. Month in, month out. Year in, year out. This is how you climb to the top 1%.

The Success Rule of Thumb

Be consistently around the middle of the pack. It puts you in the top 20% in the long term.

Be regularly better than 66% of everyone else. It will easily land you among the top 2%.

Show up, add just a little extra (around 75% of the average performance). It makes you the top 1-percenter.

The post An Ultimate Secret to be in the Top 1% appeared first on ExpandBeyondYourself.

I’m fascinated by the topic of changing one’s life, because I changed my own and I help others to do the same. I found the…

Yes and no. No, because it’s not a skill. You cannot say that being a great doctor or a great basketball player is a skill.…

Changing one’s life is a lengthy process. We are so impatient. We dream about overnight success or a one-week life change. Somehow, it’s so easy…