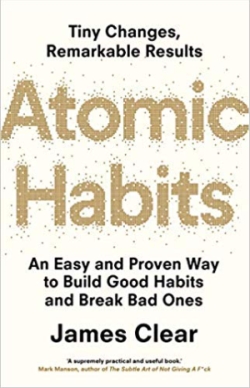 The author’s experience shines through the pages. It has a few minor weak points, but overall it’s amazing.

Traditionally, let’s start from the (minor)

1. Not enough respect for the power of mind.

You see, if the environment determines habits, then each and every prisoner of German concentration camps or Russian prison camps should become a beast. They were purposefully put in these beastly environments.

That’s an extreme example. I have another from my own life. Ask James Clear, ask any expert on habits — starting dozens of new habits while staying in the same environment is not possible. Yet, I did it. Maybe it was the case of the ignorant who didn’t know what’s possible, but I did it.

Yes, most of the habits I developed were tiny: writing 1-3 entries about my wife in a gratitude journal or smiling at people when I made eye contact.
But some were big enough to overwhelm quite a few people starting a new habit: studying the Bible or practicing speed reading for 10 minutes a day.
And I did that on top of already practicing many habits that are impossible to achieve for most, like doing 100+ pushups and 40+chin-ups a day.

It’s closely connoted to the con #1. James writes from his experience and he draws a lot from research. So, he doesn’t take into account some methods that were proven to not work for him or repeats the generally accepted conclusions, like the statement that your willpower is a limited resource and you need to work around this to work on your habits.

Well, that’s true for most. However, there was another study done which concluded that your willpower is limited only if you believe it is (back to the power of mind).
I think this is why I succeeded with my transformation – I had no regard for willpower at all. I didn’t think of it. I didn’t try to save it. Whenever I resolved to do something, I followed with consistent action.

But I’m the first to admit that this kind of mental programming is a difficult art. It’s much easier and more reliable to master the basics of habits development that the author explains than to try to believe your willpower is unlimited.

I won’t tell you about all the greatness which is included in Atomic Habits. This book is really good on the scientific level and habits knowledge, but so were other books I read in this field – “The Power of Habit,” “Mini Habits“ or “Better than Before.”

This part of the book is huge! I found no one else but me ever talking about this topic. Habits aren’t just mindless executions of preprogrammed routines. They aren’t just a chain of neural impulses saved in the basal ganglia. At least, not in the case of humans.

I have a writing habit. I write in different places, different times, different languages, about different things and in various styles. If you seek for a pattern of a neural loop you’d have never guessed writing is my habit. Yet, I missed only one day of writing since the 23rd of September 2013.

How come? Easy, I identify myself as a writer.

If you can weave in identity into your habits they become indestructible.

No other book stated this so clearly and provided simple instructions on how to harness the power of identity in the service of habit development. This part of the book is worth its price.

2. The holy grail of habit development.

“The holy grail of habit change is not a single 1 percent improvement, but a thousand of them.”

I agree 1,000% with the above statement. It’s nice to write every day or exercise every day. However, the synergy of two habits is greater than the results of one habit and if you mingle dozens of them magic happens.

I didn’t come even close to the 1,000 new habits. I’m maybe above 100, maybe approaching 200 (it’s hard to tell, habits are automatic to the level of invisibility). Yet, the last seven years of my life seem to be taken from a Hollywood blockbuster.
An overweight, purposeless and thoroughly miserable guy becomes a successful author, turns his life around and influences lives of millions readers.
Just a few highlights: buying our  first home, liberating my wife from a day job, downsizing my corporate employment to 10 hours a week, beating hundreds of personal fitness records, publishing 16 books, losing weight… the list just goes on.

A lot of Clear’s methodology comes from the conviction that the human brain is a prediction machine. It makes a lot of sense.

I am convinced the brain is foremost a search engine, but James’ theory fits into my concept. The search engine’s functionality is more basic, is one level under the prediction mechanisms. In order to predict something, you need to gather and analyze data first.
We do it instinctively. Millions of sensual impulses are bombarding our senses every single second. Our brains filter out whatever they deem not important and prepare the 10,000-foot view for a conscious mind from those millions of impulses.

How does it affect habit development? When you pay attention to your habit, for example by tracking, you tell your brain this activity is important. It will install additional filters to catch everything related to your activity. You will fish out more sensual impulses related to your habit. You will have a better data set, thus your predictions will be more accurate.

In other words, the author’s methodology makes a tremendous amount of sense.

James Clear’s model of behavior change is not complete (see CONS), but it’s the most complete model I’ve ever seen. And I’ve pretty much consumed everything written on the subject of habits.

What is more, it is extremely practical. It’s fine that the power of the mind is much stronger than even your habits, but try to learn the power of the mind! Good luck! This field is full of hogwash and you can find a gem only from time to time. Applying such a gem? It’s even harder.

James Clear’s approach is doable for everybody. It makes sense, which is also very important. This model can be fit into a single index card. While very simple, it encompasses everything needed in building good habits and breaking bad ones.

Make it obvious <–> Make it invisible

Make it attractive <–> Make it unattractive

Make it easy <–> Make it difficult

Make it satisfying <–> Make it unsatisfying

I could’ve instanced stories from my own experience proving each and every one of the above points true. It’s simple. It is doable. It works.

Atomic Habits is like a California creek before the gold rush. You bump into a golden nugget every few steps (several pages).

“The downside of habits is that you get used to doing things a certain way and stop paying attention to little errors.”

I’ve seen this articulated so clearly (pun intended) for the first time in this book. Habits are great. Habits make you who you are. Habits are omnipotent. There is nothing more important in your life than habits.

Yet, when you stop paying attention, you pay the price. I was so smug about my fitness routine- doing hundreds of pushups and dozens of pullups every day- that I missed little errors in my routine. I’ve been training like this for years, I was certain I figured it out. I injured my shoulders and I’ve been rehabilitating them for 9+ months.

“In a perfect world, the reward for a good habit is the habit itself.”

Amen. I think, I succeeded in my crazy habits development because it was my mindset. I did my habits for the habits sake. Any eventual rewards were just secondary benefits.

“A habit must be established before it can be improved.”

“Start with repetition, not perfection.”

I preach this all the time. It’s great that you want to be an author, but if you don’t write, you don’t become one. And you don’t have to write a book tonight or tomorrow. Write a paragraph per session, do a few sessions a day and you will have a book in a few months. Don’t just dream about the nice end effect. Focus on consistent discipline.

“Dopamine is released not only when you experience pleasure, but also when you anticipate it.”

The research quoted in this fragment of the book was eye-opening. It’s not about experienced pleasure, it’s how we think about the experience that brings pleasure.

“Our expectations determine our satisfaction.”

Managing your expectations can make a difference in habit development. Remember: make it satisfying or unsatisfying.

I’ve just scratched the surface. This book is down to earth and effective. It’s brilliant and well written. It provides concrete action steps to build, change or dismantle your habits. It’s great. I recommend it wholeheartedly.