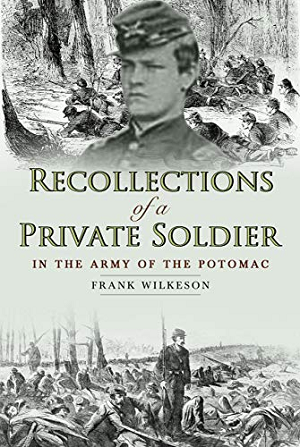 The older I get, the more I value true accounts over fiction. When I was a kid I read historical fiction books by the hundreds, no exaggeration. I wolfed those books and they filled my head with adventures and heroism.

Now I prefer to read true stories and shake my head in amazement at common folks’ bravery and cowardice. Life writes the best stories.

I’m not American, so I had no big interest in the Civil War. I knew about it what I learned from school in history lessons and whatever I got from references to the war in pop culture and other books I read. This was the first book dedicated 100% to this topic I read and I loved it to the core.

I loved everything about the book: how it portrayed the society in the 19th century in miniscule details, how it told the story of warfare, how it analyzed the big picture and provided convincing conclusions, and how it painted the picture of war back then.

But I mostly loved the total authenticity of the soldier’s account.

Apart from the author’s own ruminations, the one reflection I got from the book was that organization and resources triumph over the fighting spirit. The northern army was terribly demoralized, yet they won. The southern army was portrayed as full of fighters despite the pitiful state of provisions and equipment they had. But they lost.

A fighting spirit PLUS organization is really superior to both of the above scenarios. Northern armies were decimated in the first years of the war, but their ranks were full of genuine volunteers back then, fighting for the cause. They advanced despite the hammering they got.

And boy, the North was well organized indeed, even to the card sharks in steamships with fresh recruits. All those bounty-seekers thought they were tricking the government to pay them big bucks for nothing – they planned to desert or at least cover the back lines – but before they even arrived close to the battlefields, the government robbed them by the hands of professional card sharks of most of their bounties. It was as treacherous on both sides as it was brilliant on the side of government. They got their cannon fodder for the fraction of the cost while getting rid of many scum from Northern cities.

I was struck by the respect Union soldiers had for their enemy. While the battle went on they butchered each other. After the battle they treated themselves with respect.

This respect was almost ridiculously confronted with the contempt the author had for their own side. Well, I don’t blame him. The menagerie fighting for Union was really pitiful or downright spiteful. The only soldiers he really admired were veteran volunteers. Poor immigrants who had no idea what they were doing in a foreign war or scums from slums who could kill you for a scrap of food no matter what uniform you wore truly didn’t make good soldiers.

Of course, part of it was the author’s unique perspective. He was very familiar with the scums in his own ranks. They were probably scums fighting for Confederates as well, but the only Confederates he ever met were those on battlefields valiantly fighting against his units.

Apart from the picture of war itself I appreciated the various range of insights the author provided, sometimes even by accident. How black freed men were treated by their ‘saviors’. How logistics were screwed for the sake of accounting. How much officers’ leadership had an influence on the battles outcomes.

I particularly loved two of his after-war accounts. His description of the South’s borderlands ravaged both by war and by true civil war among the citizens. Those rednecks were killing each other like vengeful men in Sicilia… or like folks during genocides.

What was different was that there was no underlying ethnic conflict… and that killing continued for at least one more generation, because all the boys were raised as avengers.

The second account was about prisoner camps. We could see that North didn’t handle confederate soldiers with kid gloves. They were dying by scores every day and nobody cared. That was the reality of that time. People were dying from starvation and sickness all the time on both sides, and the Union definitely preferred to dedicate their resources to their own.

On the other hand, the factors that killed most of the prisoners were not caused by mistreating but rather lack of spirit and boredom. I found it fascinating how this picture was in line with the conclusions Victor Frankl made about German death camp victims. While WWII camps were purposefully designed to kill the spirit and bodies of the captives, those who cultivated their hope had chances to survive. Those who gave up, died. Amazing how much our attitudes can decide our fate.

However, all the above observations were extras to the main subject of the book, which was war. About half of the book is dedicated to the account of fights, battles and maneuvers from the perspective of a common soldier. Pure fighting. Battles. Mayhem. Piles of massacred bodies. There is plenty of this in “Recollections.”

Again, those scenes were described in extraordinary detail. The author wrote about tactics, armaments, sniping, and equipment, about how soldiers fought and how they died. This book gives a war picture from the front scene, like no movie does.

I loved the author’s summary of the campaign he fought. Clearly, the lad was bright. And he gathered his intelligence carefully among fellow soldiers. The northern army wasn’t led well and was plagued by bounty-seekers who brought down morale like nothing else. The only reason they won was that they had vastly more resources. And of course, bounty-seekers fodder to carry those resources to the front lines.

I loved everything about this book. It gives an amazing insight into 19th-century fighting and society. 5 stars all the way!