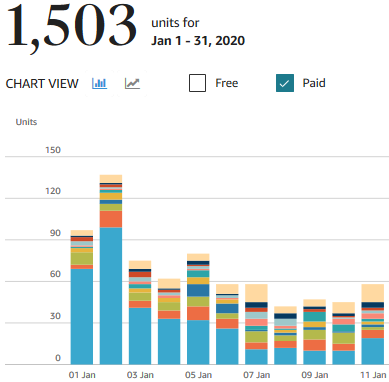 January 2020 was the month of overwhelming hustle for me. In the first week of the month, I had three holy days and I had only one day of work prior to January to catch up after the Christmas break.

I was playing catch-up for the whole month. Seriously, I remember working on the 30th of January and dedicating the whole day to creating ads orders for my team and replying to emails.

So many things happened that I have a tough time picking one to begin this report.

In the second week of January, I promoted to my subscribers a bundle of productivity resources. Frankly, I did that to make some money. However, the bundle was ridiculously discounted, so I had no remorse in promoting it. In the end, several people bought the stack. I made in commissions enough money to pay for three months of my Aweber fees.

It was also an opportunity to get rid of plenty of subscribers who were freebie seekers or had been on my list only because they participated in some book giveaway. I “lost” about 200 such subscribers.

I had quite a lot of work preparing my presentation for the webinar conducted at the end of the month. Considering the time spent on a couple of calls before the webinar and on slides preparation, the fee I received for the webinar wasn’t as exorbitant as I felt when signing up for the deal. I got about $50 per hour of work.

I could employ my freshly learned presentation skills from training in my day job. Cooperation with Bellevue was flawless. I got the feedback that 800 leads (a combo of book downloads and webinar participants) we generated was a huge success for such a campaign. The pinch of feedback I got from the webinar participants was very encouraging too.

I also joined Bryan Cohen’s 5-day challenge. I hoped to eventually learn something, but my real ulterior motive was to engage with people in his group and shine with my expertise.

Well, it didn’t pan out very well. I didn’t learn much. My thoughts about most authors’ ineptness with ads were fully confirmed. That was my main takeaway from the challenge. In a way, it’s been encouraging, I’ll never run out of prospects.

But other than that, the challenge was a waste of my time. In the midst of January’s craziness, I didn’t have time to properly connect and contribute to Bryan’s group. I exchanged my time for nothing. It is called a learning experience. Well, normal people call it a failure

I managed to publish only an income report on my blog for the whole of January. I had no time and energy to prod my proofreader. Besides, I delivered my texts quite late to her, so I had no right to expect them to be delivered promptly.

Then, when she provided the docs I was buried below the mountain of work and never found a time to publish those posts.

Dave Chesson from Kindlepreneur updated his free AMS ads course to include all the new shiny improvements Amazon implemented in the last year. He notified his subscribers (100k+ ?) and I got a lot of prospects in the result. How come? At the end of the course, Dave names a guy who can run the AMS ads for you. Me.

Not only I got more prospects, but I also picked more of them to cooperate with. When time is as crazy as in January, I can barely onboard two new prospects. I accepted five or six applications. It wasn’t the smartest decision in my life.

On the plus side, I could be very picky (and I was). So, the applications I accepter were either a perfect fit or just a fun thing to do (like a book-tribute for a 15-year old sister who died from cancer).

I also got a few old customers into the Canadian market, since my Canadian account was working again.

I did very little in that regard in January, despite the fact it was supposedly one of my January 12WY projects. But I managed to record a few training videos, document some bits of the process. I got a couple of cool side effects of those activities. Realizing that I have gaping holes in my process, I taught my friend to check on my customers’ accounts every few days to notice whose ads were getting unprofitable. I also trained my dad to review recently created campaigns and make sure no one was using the default Amazon bids which are way too high for my method.

The first weeks of January were very quiet in my day job. I started slacking there again. This time, I fiddled with my stuff during office hours instead of mindlessly browsing on the Internet. That served my sanity much better.

It also made the prospect of going to the office more bearable. Even the most trivial stuff in my business is so much more exciting than my day job.

Are you curious about a 3-month delay? I explained it in my first income report. The first days of April 2018 were busy with calculating…

Are you curious about a 3-month delay? I explained it in my first income report. May 2018 started with a long holiday. The 1st and…

Are you curious about a 3-month delay? I explained it in my first income report. June 2018 was full of hustle. Some of it was…