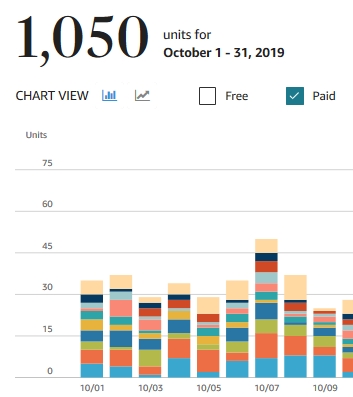 I started October 2019 calculating the profits of my customers. I went through the process entirely by myself and did it manually. I had to recall from September which ratios and thresholds I used.

The only thing I did the smart way was preparing an Excel sheet with formulas. In upcoming months I’m going to upload it into a Google sheet and let my sons fill in the data.
Half of the work is putting the cost figures and clicks from my customers’ AMS dashboards, and my boys can do at least that. However, with the number of customers we serve, it’s pretty obvious they will have to process some royalty reports too.

Some of my customers weren’t yet used to the process and didn’t provide royalty reports in time. I had to nag them for that. I spent the first two weeks calculating and chasing my customers for data. The rest of the month wasn’t very productive either.

I took half of October off in my day job. On the 17th of October, I went to my church community’s yearly retreat. The only thing I did business-wise in those four days was writing and checking on my coaching clients.

I was back at home on Sunday, and on the 23rd of October, in the morning, I flew to my mastermind retreat in Nashville. I was back at home in the evening on Tuesday, the 29th of October. The retreat was very intensive. I sent only one message to my coaching clients. I also had one call with a customer. The retreat was so demanding that I even missed one day of writing.

Luckily, this time I almost didn’t suffer from jet lag. It was luck indeed, since I didn’t sleep longer than 6.25 hours during any night but the first one. I had no idea how I survived the 20-hour back trip to Poland. I slept only 4.5 hours.

On Wednesday evening, after a 16-hour trip, I had dinner with a few guys from the mastermind retreat. The next day, I managed to do my morning ritual, habits, and some work before 3 p.m. I also had a very deep conversation with my host. At 3 p.m. I went to the pre-event meeting. We had dinner and then we went to a hockey game. I was in bed just before midnight.

I didn’t sleep well and woke up around 6 a.m. on Friday. That was a good thing, since I could do my morning ritual and some habits before the call with my customer. Around 11 a.m. we left our host’s home and drove to the retreat’s site. The rest of the day was blurry and full of networking, sessions, and activities.

Saturday was even worse in that regard. That was the day when I missed my writing. The day was packed full from the breakfast at 7 a.m. till the last session, which finished at 10 p.m. And then I hung out with my mastermind buddies at the hotel.

Sunday started as intensively. The retreat finished around 11:30 a.m. and I went out to lunch with a few other guys. Then, my buddy drove me to a Preston hotel.

I checked in, took a 10-minute nap, wrote, did a couple of my habits, and went to mass. Back at the hotel, I met with my friend Rebecca Patrick-Howard and her family. We ate too much pizza.

They went to the cinema, and I finally caught up on sleep a bit. I had a 40-minute nap. Then I finished my habits, took a bath, and did some research for the next day.

On Monday at 7 a.m. I had a meeting with Dave Chesson in Franklin, about 30 miles from Nashville. I took an Uber to get there.

The Uber drive itself was an experience. The guy who picked me up was a 50-year-old former factory manager. He’d quit his job to pursue his dream of being a songwriter.

When he asked me about my story, he got the full version of it. When I was telling him about figuring out my writing career, discovering that writers write and concluding I need to write every day, Harold (my driver) had a minor enlightenment. He told me he introduced himself as a songwriter, but he didn’t do much about this on a daily basis.

However, the trip to Franklin was just a foretaste of my conversation with Dave Chesson. We caught up in a few minutes, and Dave started bombarding me with great advice on setting my business straight.

Apart from a solid dose of down-to-earth advice, I got a handful of peeks into the big world of publishing (hint: B&N prepares some great stuff for self-publishers) and loads of inspiration. My favorite quote (I made Dave repeat this, so I could write it down) was:

“It’s so easy to bring so much traffic to your site that it’s not even funny.”

I got back to Nashville with another Uber driver as interesting as the other guy. William was a retired IT project manager who drives Uber to not irritate his wife, who is working from home. He had some awesome stories to tell both from the IT and the Uber worlds.

Back at the hotel, I met with Rebecca and her family, and we went for an educational trip through Nashville’s downtown. Rebecca was the guide for me and her kids; she’d studied at Belmont University, so she knew the city pretty well.

The icing on the cake was a meeting with one of my readers, Brad.

I was sleep-deprived for the whole US trip. I slept for more than seven hours on only one night, Wednesday, and it wasn’t seven hours in a row. I woke up at 3:20 a.m. and my body was insisting it was late morning. I did my morning ritual and went to bed after a couple of hours.

At the beginning of the month, Amazon introduced a new interface for the AMS system for authors. It was a disaster. Overnight, the creation of a new ad started taking five to ten times longer. I remember one time I created a template ad on the train to work. It took me 40 minutes!

My team was used to creating a few thousand ads per month. This “update” killed my system. One of my team members, a sister from my church community, was hit especially hard. Her computer was somehow sensitive to whatever Amazon did with the process of uploading keywords to a new ad. It took her so long that the browser session expired every time before the keywords were uploaded. In October, she did about 300 ads, compared to the around 2,000 she had been doing on average in previous months.

And the whole October passed without Amazon fixing any of my three corrupted accounts.

One of the points that changed in October was opening the DE and UK markets for all authors. I was stoked since my UK account had just got corrupted. I quickly created a new account and set up new ads.

In the DE market, I experimented with advertising my books in English. It took a good chunk of the month before my team finished with my customers’ ads and created mine in the DE. They started running at full speed only on the 16th of October.

The number of impressions was pitiful, only about a quarter-million in two weeks. The conversion ratio from impressions to clicks was about the same as in the UK. The clicks-to-sales ratio was surprisingly good. My ROI was about 360%. I made about 1 EUR per day.

I got new promising prospects through my funnel, starting with the free AMS course on Kindlepreneur and three others through referrals.

One of them was a very special case—he was launching his book and he needed not just help with ads, but also with uploading files to Amazon, categories, keywords, and all the pre-launch stuff. It meant even more work than usual. Luckily, they all could wait, because they were forced to wait anyway.

I sent them the onboarding instructions and promised to get back to them at the beginning of November.

I practically wasn’t working for half of the month, yet I felt more stressed out than if I had been working around the clock. First, I had to catch up with profit calculations. Then, I got a whole bunch of new prospects and I spent the second half of the month traveling and recovering. Amazon’s “upgrade” of the AMS interface wasn’t helping the whole situation one bit.

On the other hand, it was the best month ever for my advertising business. I made over $2,800 in revenues. The royalties from August were pretty high. This was my best August since I published my first book.

My coaching income reached 8.5% of the overall income, whereas it is usually under 5%. My gross revenue was lower than in September, but only because I got the one-time $1k deal with the Bellevue University last month.