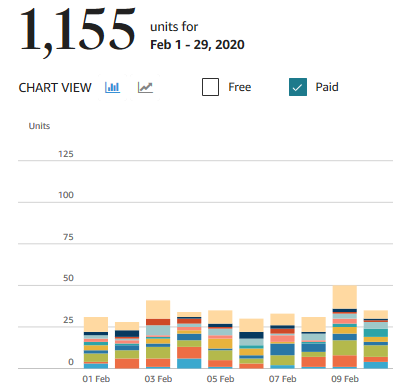 If I could describe February 202 with one word it would be: “overwhelming.” Whatever momentum I gained in January, I lost it in February.

Part of it was the fact that I drove myself too hard in January and my subconscious reacted with resistance.

I definitely paid too much attention to negative events. One good client fired me in the middle of the month. We had had a call just two weeks before and she said she trusts me. Then, bam! I didn’t see that coming at all.

Book sales were dropping across the board, for me and for my customers. It’s normal at that time of the year, yet it added to my foul mood.

I’ve got the tax documents from my employer. For the first time, my accountant did my business tax. The initial verdict was hopeful: I should get a small refund. Then, it appeared that having a business I cannot do taxes together with my wife and use some write-offs. Heck. The difference was $2k.

More Things to Do

I was in the capital almost every single day. If not for my day job, then for my rehab sessions. It appeared I’m too old for the daily commute. It added to my stress levels and robbed me of some productive time.

I had a call with the owner of a new email marketing company. I decided to switch to their service. Not only it was cheaper than my current provider, but the new company also did so many things better than the old one. I was proved right when I sent a broadcast to my inactive subscribers. Aweber said they didn’t open my emails in the last half a year, but quite a few of them replied that they actually read my emails quite often.

One immediate benefit of this action was that I got below 5k subscribers after cleaning my list and saved $20 on the email bill.

Basing on the feedback from my podcast interview and on Polish Quora, I decided to start a blog in Polish. The traffic on Quora in Polish tripled for me, then slowed down to the double the previous level.

My wife promised me some support and my mastermind buddies weren’t against it. I bought hosting, installed WordPress, bought a theme, created the first page, and lost all the steam.

I wanted to develop a new habit of writing the thank you notes every day. I succeeded maybe half the time. And this 50% success ratio was only due to accountability from my mastermind buddies. If not them, it could be even worse.

We had a trip to Athens planned for the end of March with my wife. In February, we were hearing the rumors about the coronavirus, but we didn’t treat is serious at all. I even wasn’t concerned about whether we will go to Greece or not. It was just another annoying thing on the long list of things that weren’t going exactly as I wished for.

I had a consultation with a presentation skills expert after my podcast interview and webinar for Bellevue University. He gave me some feedback. I immediately implemented one bit and moved the desk in my home office so my background would be less distracting.

It worked very well. My mastermind buddies noticed that. Some of them even thought I’m in a new place.

I also have a performance review. It was very informal, both I and my supervisor knew that my day job is not high on my priority list. She gave me an unofficial blessing to take care of my stuff when there were quiet moments on the project. This actually improved my mood. It helped me to not be bitter about losing my time (and money!) by working there. You know, the difference between my hourly wage in my day job and my business is about $20.

I put Directed by Purpose and Making Business Connections into a couple of different book promotions. The first book sold about 120 additional copies, while the other about 20.

It’s hard to say that the effect lasted for longer than a few days. Which is why I don’t organize book promotions anymore. I only participate in the ones organized by others.

Contrary to what you might think after reading the above list of complaints, the business was doing well. Dave Chesson added some content to his free AMS ads course and notified his massive list about it. At the end of the course he recommends my services, so I got a throng of new prospects. Some of them were actually a good fit. Most of them weren’t.

Anyway, despite all the hurdles it was a very good month for my advertising business. I made over $3,500 which still was 24% more than the best result in 2019.

I invited a couple of old customers into the Canadian market. The ROI there has been very impressive. In fact, it was Canada that kept the whole business afloat. The margins in the USA went down to low 2-digits.

Since I advertise my customers’ books in Canada under my Advantage account, I pay for those ads from my own pocket. It caused some cash flow problems. I was charged four times in February, including three times with a full $500 payment. I agreed with my five biggest customers they will pay me the cost estimation in advance, before the end of the month. And they did. Yet, my all ads came to a scratching halt when there weren’t enough funds on my debit card. Twice.

With new European markets available and new kinds of ads and bidding options, I experimented some. I tried the category ads and tested up & down bidding against down-only option.

None of those experiments were especially successful. I only determined that in Canada it’s still better to use down only bids. Ads with those bids were getting marginally more impressions and they were a bit cheaper than the ads with up & down bidding.

On other, more competitive markets down only bidding almost morphed into “this is the default bid.” So, if I bid 10 cents, the average cost per click was 9 or 10 cents.

The influx of new prospects made me reconsider my business model. I couldn’t keep the old one – trying all promising prospects and work with those whose ads will be significantly profitable. I lost too much time on this and my team created too many ads that were a waste of their time. Thus, I was dedicating my resources to activities that were very risky in terms of the return.

To add insult to the injury, it was harder and harder to determine if my ads were giving a positive net result. When my ads’ ROI was 100%, it was easy for my customers to see the difference. When it came down to 20-50% it was much harder, especially with the wonky AMS sales reporting.

So, I came up with a new model. Customers would pay for my service in advance. I would include the book page review, creating and managing the ads for a month, and the final report explaining their numbers in the price. And I could continue the cooperation with authors with books that did exceptionally well.

I came up with this idea mostly for 1-book authors because about 70% of my prospects were such authors and my way of doing ads worked only for a few of them.

I took one author with several books in the series. A few of them were stand-alones. His books were in the Kindle Unlimited program, which made the results triple hard to track. After running the ads for a few weeks we still had no idea if the ads were in green or in red. His audiobook sales jumped a bit. His pages read (KENPs) stayed on about the same level, sales too. Which was a good sign because up to that moment they were on a downward trend.

Probably, my ads helped a lot to maintain his level of royalties, but we had no way to tell.

I created ads in Canada for him and the results were fast and furious. He had been barely selling a few copies a month before. He sold a few dozen copies in February and his pages read increased significantly as well. The ROI was 172%, even with $20 spent on his non-stand-alone books which appeared to be an advertising failure. We got this ROI only with the things we could pinpoint; he probably made also some audiobook sales too.