The first days of April 2018 were busy with calculating profits of my customers and preparing for my trip to the USA. I was able to issue almost all invoices. I ignored only one or two of the smallest customers, saving them for the next month.

Traveling to the USA was a nightmare because of jet lag. I woke up at 3 am and my day was 27 hours long. To add insult to injury, I slept only 3.5 hours. A big mistake.

I got four longer naps during the flights, but it wasn’t enough. I felt like a zombie when I finally landed in Nashville at 6:30 pm CT. 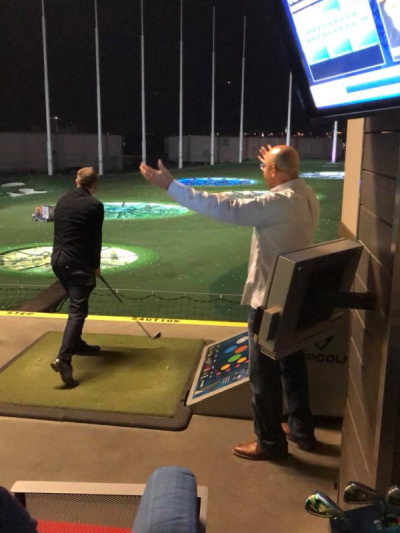 Still, I was ecstatic about meeting Aaron Walker and guys from my mastermind. Straight from the airport my new buddy, Chad Jeffers, took me to a mini golf facility for a pre-retreat meeting. I had a golf club in my hands for the first time in my life. Aaron gave me a few tips about the grip and swing

The next morning, we played Paintball before the actual retreat. It was a lot of fun. 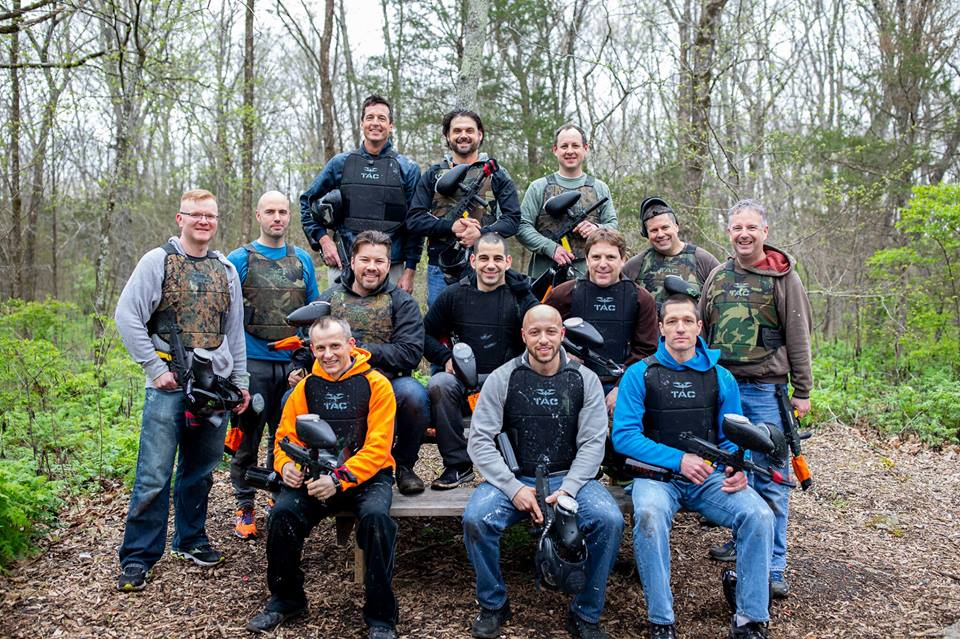 But the biggest fun was meeting in person guys I’ve seen on my computer screen for so long. I met several men from my current mastermind. I met Greg Gray from my previous mastermind. He looked quite different in person and I didn’t recognize him. He had to introduce himself and only then, a lightbulb in my head turned on.

I also met Scott Beebe, my previous mastermind’s facilitator, a great man. This all was awesomely awesome.

I met even more folks who knew me virtually and vice versa. I also met plenty of guys I hadn’t interacted with before.

The retreat was insane. The days were full-chocked with speakers, meetings in smaller groups and networking. The evenings were long, and we spent them among our mastermind group. Those two days simply zipped through my life. 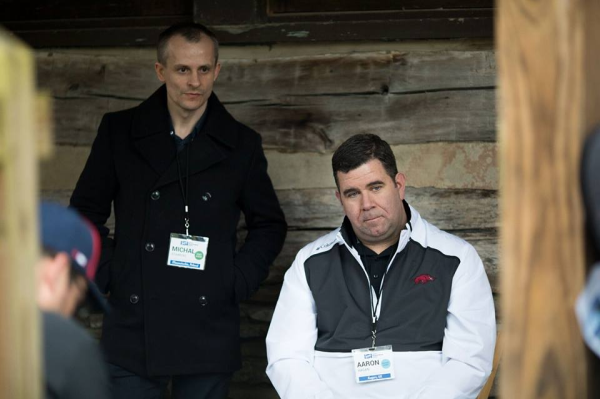 I spent Sunday afternoon and evening recovering. I had to catch up on sleep. But Monday was fully booked too.

In the morning I met with my reader who was polite enough to reply to my call to action in an email broadcast when I asked if anyone wanted to meet with me in Nashville. He met me via my InstaFreebie giveaway and for a moment had a hard time putting a finger on how he even joined my email list. The breakfast was great and we had a rewarding conversation discovering more about each other.

And then I spent three hours in the presence of Dave Chesson. I reached out to him long before the retreat knowing well that he lives near Nashville. Dave agreed to have lunch with me. I was excited to meet him in person.

Dave has a magnificent grasp about self-publishing and all the trends that happen within. And I had no idea how well-connected he is. He knows everybody in the online marketing space and everybody in the online marketing space. He is a drinking buddy of one of the prominent authors. He is a friend of Steve Scott. He worked with Pat Flynn… heck, I forgot most of those prominent names. I think my jaw dropped dangerously low to the floor level.

Dave gave me some invaluable tips on how to improve my Resurrecting Books website and my whole business. I was making notes like crazy. He told me that my business has easily a million-dollar potential and he conveyed it in such a way that I actually believed him! He crushed all my nonsense excuses and limiting beliefs over one lunch.

And he was so approachable, so next-door-guy. I felt so at ease chatting with him. Dave is the man! 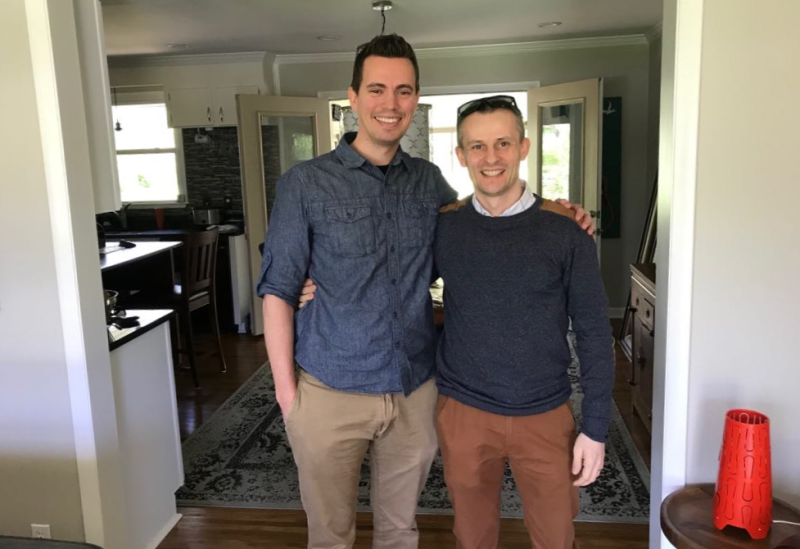 At Chad’s home before the lunch

When he lifted me back to Chad’s place my hands were literally shaking. Normally, I’m a very composed man, it takes a whole lot to shake me. But I was so excited after this meeting! I spent two days with almost hundred guys and some of them were millionaires and influencers. But I consider this lunch with Dave the high point of my whole trip to the USA.

A sneak peek into the future: I rebuilt my website according to Dave’s guidelines.

Chad Jeffers is a professor at Bellmont University in Nashville. He asked me to speak to his students about my story. Despite my introversion, I had never a problem with public speaking or with speaking about myself

I agreed and spent a couple of minutes ordering the speech in my head. That was all.

My presentation was far from perfect (starting from my pronunciation), but the students were really receptive. I talked for something like 10 to 15 minutes and then answered a bunch of their questions. Then I gave some autographs and had a photo with Chad and a couple of his students. 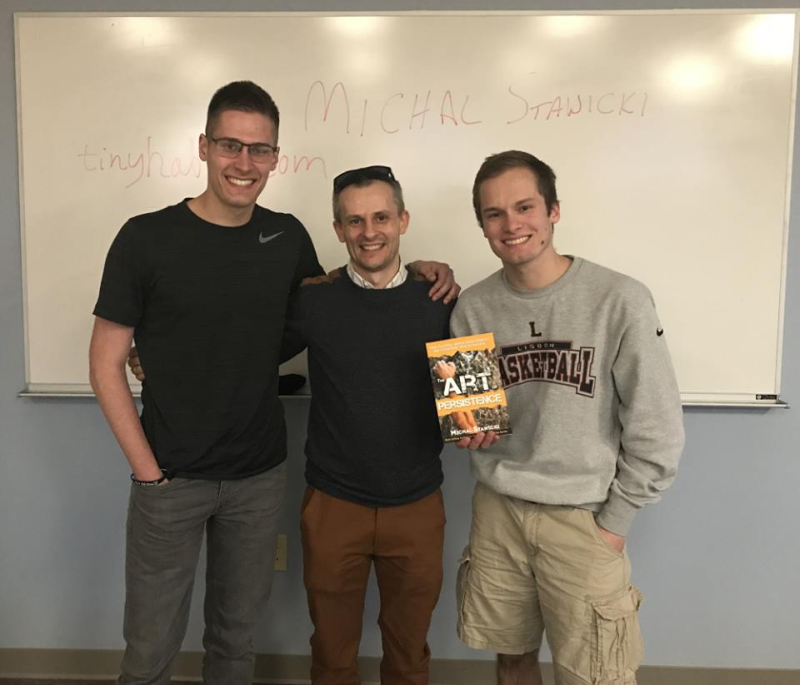 One more thing Dave reminded me about was the power of networking. Thus, I reached out to a successful author, Martin Meadows. We were on speaking terms a few years ago and observing his success I wanted to get back in touch.

We had a cool 1-hour call, and at the end, I convinced him it’s worth it to run AMS ads for his books. I created several dozen ads for 7 of his books and we scheduled the next call for the beginning of May.

Dave Chesson advised me over lunch how I should improve my website. When I came back to Poland I started working on it. First, I mapped out and wrote the content. Then I reached out to my mastermind buddy who is a marketing coach and spent on the phone a couple of hours with him.

Once I provided the content, my buddy pretty quickly setup the new outlook. While he was busy with that I was collecting testimonials from my customers.

It was an easy, step-by-step process, mostly because Dave gave me the core ideas on a silver platter. Have I mentioned Dave is amazing?

In the middle of April, I got back to daily publishing on Quora. I finally have time for that and cooperation with my new proofreader resulted in more than a dozen new answers prepared for publication.

Speaking of my proofreader- our cooperation was reasonably smooth. Thanks to her help I kept my daily publishing schedule well past the end of April.

It appears that Quora loves consistency. My views on that platform tripled within a week and stayed tripled.

All content platforms love consistency, even Amazon. You will get favorable treatment as an author, if you publish a new book every two months, not once a year. I wonder, how much of this is the result of human beings’ love of consistency. It was reported that bloggers who consistently keep a publishing schedule get better results than those who publish more, but inconsistently.

I also reused some of those new Quora answers and published them on Medium. I regained some momentum on that platform as well.

Among all of those Quora writing, I smuggled some writing of a new book. Yes, finally, after about three-year break, I started another book. In the past year, I wrote quite a few reviews of personal development books and noticed how their authors give impossible advice to their readers: “Ask yourself a question…”

Our self-talk is so automatic, that most people are unable to do that. Oh yes, everybody is capable of stopping right there ask and answer themselves a specific question. But you know me, I believe if something is not a habit then it’s hardly worth the effort. One-time question and answer has a tiny potential of changing one’s life.

Hence, I decided to write a book teaching people how to take over at least part of internal dialog from the clutches of their subconscious.

In April I spent four days on this book; I almost finished the second chapter.

It was business as usual. I love the way I coach online. My US voyage only barely affected touching base with my clients.

But there were also a few hiccups along the way. Some people joined and promptly quit. One client joined and it was something else she expected, but she had no guts to quit, so it was painful to continue for both of us.

I got a feeling that my coaching practice was consuming too much of my energy and attention from my advertising business.

The second part of the month was more productive than several prior weeks. I tackled the backlog of articles that needed proofreading and re-started publishing on Quora. I started a project of revamping the website. The American retreat gave me the mental energy boost.

I took a day off in my day job on 30th of April and dedicated it to knocking off some to-do items from my list.

The owner of co-working place where I worked from time to time referred a Polish author to me. The author was interested in getting her books on Amazon. She had a traditional publisher in Poland and had quite a success with them. She was selling tens of thousands of copies of her books in our small market. The problem is that we earned about the same amount from royalties. I sold maybe a quarter of her volume, but I had no publisher who consumed huge chunk of my royalties.

We scheduled a meeting. She brought her author friend who also was interested in the American market. We spent 1.5 hours getting to know each other. They showed me their books and I explained the requirements of self-publishing.

They got some non-standard projects more fit to paperback versions than eBooks, but I know The Wizard of Formatting, Hynek Palatin, so that wasn’t a problem. I showed him a sample of what they expect and he immediately named the price.

Not much came out of that meeting, certainly not in April, but it was good to feel like a pro. I answered their every question, I knew the ins and outs of the process. I could suggest solutions and I knew people who could help them. I could sense that those gals were in awe. If nothing else will come out of it was a nice ego massage