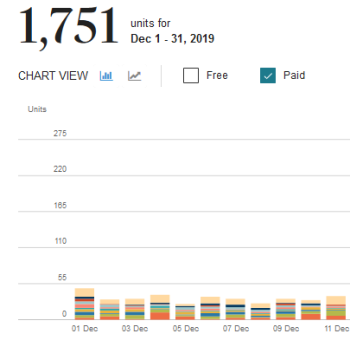 I shudder when I recall December 2019. My life was a total madhouse.
The first week of December was a normal frenzy of calculating customers’ profits and issuing invoices. Plus, of course, all the accompanying activities – gathering and sending invoices to my accountant, calculating remuneration for my team and paying all the team members, and so on.
Plus, my best customer got this brilliant idea to send some authors my way since I was doing such a good job for him. So, I got three new additional prospects in the middle of all that.
The second week was the most peaceful. Meaning that I finished all the above, had some processing power to tackle new prospects, and order some new ads for my customers and I even worked a bit on creating the onboarding process for new customers.

However, the end of this week was the start of a book launch frenzy. The third week of December was as crazy as I could get. I had a book launch and I needed to prepare the manuscript for it. A day before the launch, I had a call with a prospect and we agreed to start with three books… before Christmas! On the 20th of December, I discovered that my Canadian account has been fixed. I could finally create new ads. So I did. And I requested more ads from my team.
All of this happened in the midst of Christmas preparation, collecting gifts, coordinating the get-together with my siblings and parents, and packing for a trip.

The fourth week was a holiday week matched with the book launch. We spent six days in Plock at the family get together. I was one of the sober drivers, so I was making 3-4 trips a day between a rented house where we slept and my grandfather’s home where we had the get-together. I managed not to break my writing streak during the whole time, which was a small miracle in itself. I checked on my coaching clients a few times.
A day before Christmas Eve, after exchanging greetings and hugs with everybody, we just hang together for several hours. During that time I processed over 100 emails in my inbox. I just moved to relevant folders plenty of them, but I also took action on some and replied to a few of them.
And then just two days of December were left and I spent a few hours of my most productive time fixing the broken toilet at our home. According to my wife, it was the priority number #1

December was also a busy family month. I was in a cinema with my wife twice (Irishman and Knives Out) and once with my kids (Frozen 2). I supervised changing tires in our cars from summer to winter ones and my wife’s car technical checkup. It didn’t pass it for the first time, so I needed to organize a repair as well.
We attended our daughter’s singing recitals a couple of times and I already mentioned the broken toilet.
My hands were full.

The week before Christmas, Amazon opened three new markets in Europe: FR, IT, and ES. I created the template ads for my books the very same day it was announced. Basing on the preliminary data from one campaign, the next day I asked my son to create the whole set of ads in IT first, then in other markets.
My son created the Italian ads and forgot about FR and ES, and I was sure I had the same set of ads on all the markets. Italy was doing very well and the two other markets sold just a few copies each. I discovered my mistake only several days into January. So, I mistakenly advised a few customers to go just to Italy with ads.
The European markets are selling books in English surprisingly well. My sales without ads amounted to a few copies a month, maybe as many as 10 copies for the whole European non-UK market. With the ads, I sold almost 200 copies and only 15% of that was the sales of a new book.
The conversion rate isn’t terrific, but this was to be expected since those are non-English markets and I do basically zero targeting with my ads.
The great thing about European markets, from my perspective, is that I can put as many books into a single ad as I want. It significantly decreases the workload for my team.

At the end of November, our mastermind leader challenged me to work on my business processes. Luckily for me, it quickly slipped from the minds of my masterminds buddies. Luckily, because I did very little about it. In November, I had a few brainstorming sessions and shared their result with my childhood friend who is a process engineer in a factory.
If not his help, I would’ve done totally nothing about this during my crazy December. He helped me to translate my notes into something more coherent and drafted the algorithm of the customer onboarding process. I spent maybe one hour in December working on that process.

Usually, I use the Christmas break to ponder over my yearly goals, both reflecting how they went in the previous year and what do I plan for the next one. This year, I did very little of that. I utilized a few journaling sessions to go over my 2019 goals and decide on what to do in 2020. I simply had no time to do more.

I already mentioned I took almost two weeks off. I also used a couple of working days for training applicable in my new career: communication skills and presentation skills. Especially the second training was very enlightening. It will help me to give a much better webinar for Bellevue University at the end of January 2020.

During the second week of December, I finally had a closer look at the manuscript of 99 Habit Success Stories. I tweaked a few places fixing the timeline of my story and a few other stories. I found a few typos too. I had to change the font size in the paperback version, it was too small. It screwed all the numbers in the table of content and caused many stories to spill over a second page. I spent a few hours fixing that.
My eldest son helped me with creating the index at the end of the book. We needed to do it separately for the Kindle and paperback version.
When I finally uploaded the files at Amazon, it appeared that the paperback on Amazon doesn’t follow the format of the uploaded PDF. I had to play a few times with the margin size and space between lines to make the Amazon version identical with my PDF, so the page numbers in the TOC and the index at the end of the book would fit.

My poor cover designer had to prepare five different versions of the paperback cover till the size was exactly as Amazon wished for.

I submitted the Kindle version late in the evening on the 17th of December. I fought with the paperback manuscript almost till midnight, to no avail.
The next morning I found the Kindle on Amazon… but the whole description was “ble ble ble” – the text I inserted when creating a draft in the KDP dashboard.

I had the final version of the description ready, so I quickly uploaded it on Amazon. I notified a few advance readers who already delivered their reviews via email that the book is out there and they can publish their review.
It was Wednesday, always the busiest day of my week. That day, I managed only to work a bit more on the paperback manuscript and to notify a few more people.

The rest of the launch was as hectic as the first day. The next day, I wrote an email broadcast to my list and notified a few author friends about the launch. The broadcast sold about 60 copies! That was a nice start.
I had some time on Friday and Saturday to finish the paperback and notify more people about the launch. That was it before the holiday week.
I remember creating a list of contributors to notify in the middle of the family get-together on Monday. During the holiday week, I didn’t manage to do much about the launch. I sent several emails contacting contributors and my friends. I collected some screenshots from Amazon. I reminded Steve Scott about his promise to help with my launch.
And he did help, oh boy! Scott sent an email to his list on Monday, the 30th of December. I sold 160 copies of the book in the USA on that day. I guesstimate the overall impact of his help to 350+ copies sold, which made more than a third of total sales during the launch. 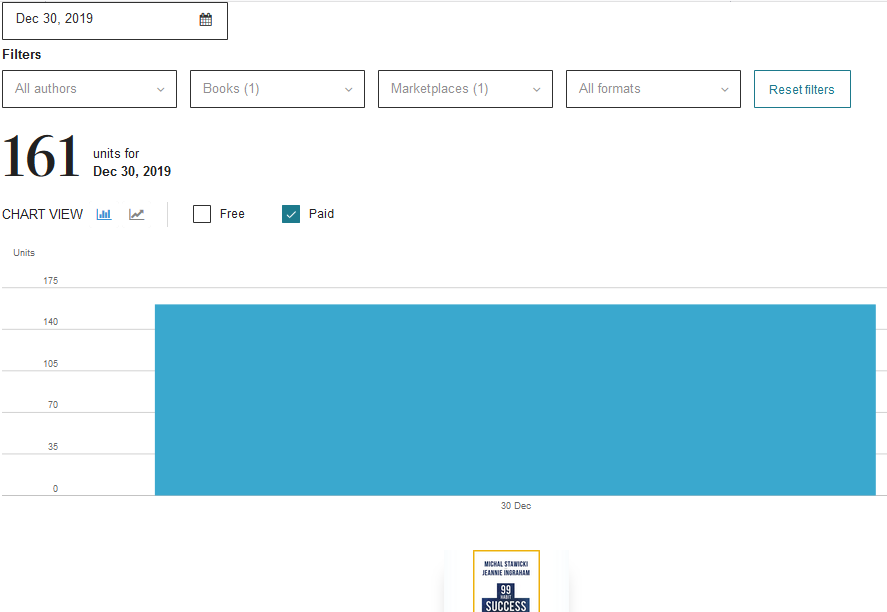 However, Scott wasn’t the only one who helped me. Som Bathla, Mimi Emmanuel, Scott Allan, Marc Reklau, Jordan Ring, IC Robledo (and probably a few others slipped my mind) all supported me in their own ways. I paid zero for marketing and sold well over 850 copies during the launch.
Well, I paid some for Amazon ads. They sold 6% of the total. A nice boost, especially considering that the ads almost broke even. I sold enough paperbacks to almost cover the fees for generated clicks.
Back at home, on the 30th of December, I finally went through the list of book contributors and notified them about the launch. It was about the last thing I did for the launch in December.
The only downside of the whole launch was the number of reviews. The usual story, not enough of them. I had 60+ advance readers who promised to review the book and I got just a few reviews from that. The rest was the usual ironclad crowd of my fans and fellow authors.

Are you curious about a 3-month delay? I explained it in my first income report. The first days of April 2018 were busy with calculating…

Are you curious about a 3-month delay? I explained it in my first income report. May 2018 started with a long holiday. The 1st and…

Are you curious about a 3-month delay? I explained it in my first income report. June 2018 was full of hustle. Some of it was…