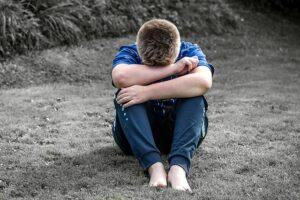 The reasons why we quit may be various and most of them come down to the wrong motivation. The way you articulated the question makes the most obvious reason for abandoning your habits:

We also have a natural tendency to preserve our energy and sit on our butts forever. However, it doesn’t mean you need to become a plant anchored to your couch. You also don’t need to subordinate your routines to chasing shiny objects. You are a human being and you have free will. Use it.

It is quite possible you didn’t give your routine a chance to become a habit. Consistently following a particular routine for a week doesn’t make it a habit. Nor doing so for two weeks, or – in most cases – for even two months.
The only research about the time needed for habit development I found says it takes on average 66 days. Hence, it’s quite probable your squirrel brain followed some routine for a week or seven driven by the desire for novelty. And when it wore out, you left the routine because it wasn’t coded in your brain yet.

There is a magical value we attach to a sustained action in our mind. Often, when you put a habit on hold, even a fully developed one, the What the Hell Effect kicks in. You don’t feel it’s worth the effort to go back to the habit because we somehow stained it by breaking the streak.

Also, when you introduce a longer break (vacations, a busy period at work or school) the habit gets weakened. It’s not like you need to build it from scratch, it is hardcoded in your brain, but it gets rusty. It needs some attention and dedication on your part to bring it back to the previous shape.

Another reason for breaking the streak is losing a trigger. This is a tough one.

Let’s say your environment changes (like getting closed in your home because of the Covid lockdown). Plenty of cues are eliminated from your environment – you no longer commute, or you can’t attend your meetings and activities. If your habit was anchored to such a cue, it literally disappears. There is nothing in your life to launch it. You must pick a new trigger and build the habit from scratch. Well, not entirely, but it will feel like it for a few weeks.

What’s the solution here?
When you lose your routine and you need to go back to it, celebrate your small daily successes with your habit. BJ Fogg invented this method for his Tiny Habits framework and he explained it best:
https://docs.google.com/document/d/1syo7Eyhx4Hek-U51lrEFIEcDtonnB6-vZ-3n0FsnPjU/
Go to the Celebrate Success section, read it carefully and implement. You will give yourself a dose of excitement for getting back to your habit.

It’s Not a Sin to Change the Routine

Our habits are powerful tools, but just tools. If necessary, we can leave them behind or modify them. A tool serves a specific purpose. If there is a better way to achieve this purpose or if circumstances prevent you from continuing the routine – stop it, or change it!

I had been doing a single series of consecutive pushups for a couple of years. Every morning, I did a series to the limit of my strength, and usually- beyond this limit.

However, when I reached about 115 pushups, I realized it took too much of my time. And I switched the routine. I started doing harder variations of pushups – legs-elevated, diamond, wide, and one-arm pushups. Later, I introduced even more variation into my morning workout by doing chin-ups or dips instead of pushups.

Over two years ago, I injured my shoulders. I couldn’t do pushups anymore; not with such intensity.
I changed my routine once again. I started doing squats, sit-ups, burpees, and lunges. I couldn’t achieve the level of intensity I wanted with most of them, so instead of exercising to my limit, I set the time limit. I do those exercises for 2-3 minutes, as fast as possible.

My routine transformed quite a bit throughout the years, but the overall goal remained the same: I exercise early in the morning to maintain my health and energy levels.

People often try to build new habits on a whim, without any strategy or tactics. This motivation dissipates as soon as the initial excitement evaporates.
However, employ the right kind of motivation, a deep reason to do something and it will be very easy to stick with your habits, even for years.

There is one clear signal that your motivation was wrong from the very beginning- you force yourself to perform your routine. Yes, you are able to consistently follow the routine, but almost every time it feels like drudgery. You avoid, procrastinate and postpone doing it, and when you do it, you feel repulsion.

Those kinds of habits have a very low survival rate. You stop doing them whenever you stop applying force to continuing them.

One of the very first habits I adopted after my transformation, was studying German for 10 minutes a day. It was heinous and tedious. I was often the merriest when I finished my German lesson for the day. I kept this habit for several months before I realized that my motivation for it was wrong. I wanted to catch up with my sisters. I have five sisters and each of them speaks at least two foreign languages.

This motivation, which sprang from the wrong kind of ambition, wasn’t enough to keep me going.

A routine serves some goal. What it is for you? If it’s killing boredom and chasing shiny objects, then it’s only natural you will leave it sooner than later.

However, actually putting your motivation on paper may clarify for you why you started this routine in the first place. Then, when boredom and temptation strike, just have a look at your stated purpose. Is it still valid? So, continue.

A habit only serves your goal as long as you practice it. Abandoning a habit creates a void that will be filled with something. Will this “something” serve your purpose? Probably not.

2. Identify with Your Routine.

I am a writer. I write. Every single day. I don’t negotiate with myself whether I’ll write or not. It’s a part of who I am.
This is how identifying with your habits make them unbreakable. Boredom? Exhaustion? Discouragement? They won’t steer me away from who am I.

The core of my personal philosophy is this:

It makes abandoning my habits close to impossible. Why should I ever do this? They bring me results. They are the only tools I can use on a daily basis to inch me toward whatever I desire.

It also makes me very conscious of what habits I adopt. When I integrate a new habit into my life, it is exactly it – the integration. I don’t start habits on a whim. I don’t start habits, which I cannot sustain for several months; there is little sense in it. If I quit after a few months I will have no results worth mentioning and quite a lot of time wasted.
How to shape and cultivate the proper personal philosophy is a subject for the whole book (which I wrote). However, having such an operating system, you can delegate dealing with your habits to your subconscious.

My wife discusses with herself every single time she is going to exercise. This is her operate the system. She hates sweating, she dreads the pain and effort, at least before the workout. After it, she enjoys the endorphins and the after-workout feeling.

My operating system, personal philosophy, says I need to take care of my body on daily basis to maintain a support system for my mind and soul. Thus, I exercise every day and don’t think twice about it. I don’t even think once about it, I just do it.

Troubles with continuing your habit often boil down to your motivation. Don’t depend on the pang of dopamine coming from the novelty. Think your motivation over and use deep reasons as the fuel for your habits, not fickle feelings.

Make sure you give yourself enough time to actually develop a habit.
When you break a streak remember to celebrate the return of your habit to your life.

The post Most Commmon Reasons Why We Quit (and what to do about it) appeared first on ExpandBeyondYourself.

Changing one’s life is a lengthy process. We are so impatient. We dream about overnight success or a one-week life change. Somehow, it’s so easy…

There is a plethora of podcasts out there, but there are only 7 podcasts that I subscribe to on my iPhone. I’ll tell you why…