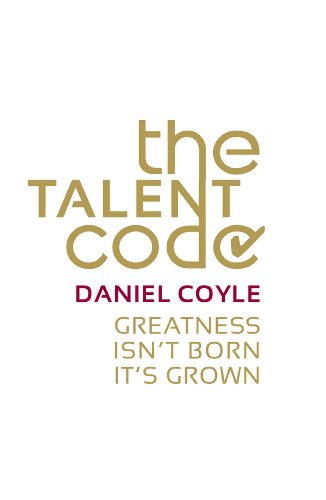 Nothing new under the sun, right? Well, yes and no. The ‘practice makes master’ adage was around for centuries. What The Talent Code does with it is takes it to the biological level. And I appreciate that very much.

This book had some downsides and some upsides. Traditionally, let’s start from…

I didn’t like it. When I read nonfiction, I don’t want entertainment, I want knowledge and practical advice on how to implement it in my life. It was sparse in this book.

On the other hand, the book was packed with stories. Each and every point of The Talent Code was illustrated by a story, or a few of them. It’s a story after story, with a few nuggets of conclusion here and there.

It’s not an accident. The book was designed that way. It was all about enticing curiosity and drawing the reader further and further into the book. A small cliffhanger at the end of each chapter, the hints about even more mind-blowing discoveries on the next page…

The stories were fascinating, by the way. I read them fast and furious. Very entertaining. So, my biggest CON – the master storytelling – may be the biggest PRO point for others.

I hated that. Reading for even one page what’s in the next chapter frustrated me. Why just don’t start another chapter so I could actually read what’s in it?!?!!

The second con comes straight from the first one. I really believe that for knowledge seekers reading a good book synopsis would be more advantageous in this case.

Not all of the words and stories in the book are obvious dingbats. But there are enough of them to make it tiring for a reader. At least, it tired me.

I think this is the biggest (and probably the only one) mistake in the book. The author called the thing that propels people to developing a talent – practicing diligently for a very long time – an ‘ignition.’ He looks for one overarching event that starts the whole process.

He also admits that the environment in talent hotbeds supports the whole process, however, the very name he gave to the starting factor (and his narration too) says that one overarching moment is more important.

It’s true that a single event can change your whole life. It’s very easy to connect the dots in such cases because the effect of ignition is remarkable. It’s so huge that it’s impossible to miss.

For example, my mentor killed a pedestrian. Not his fault, just an accident. But it was a turning point in his life. He moved from pursuing success in his life to pursuing significance. That event led him to start a coaching practice. He influenced millions of people (he was interviewed on big podcasts a few hundred times) and he leads a group of 100+ men teaching them how to live a life of success and significance.

Here is the problem with my mentor’s story: it happened to him. He didn’t plan to kill a pedestrian. Holy cow! We cannot all base our greatness on killing people on the street! Or on the fact that this or that sportsman achieved a huge success (a few sport stories were the main illustration of ignition in the book).

It’s nice (or not; vide my mentor’s story) if something happens out of the blue and you change. But you cannot sit on your butt waiting for ‘ignition.’ Look around! It doesn’t happen very often!

I think the poor Daniel Coyle fell in this point to the illusion created by media. Ignition stories are very media-worthy. They keep 99.99% of the media space when a life change or great talents are discussed. So, naturally, we connote a life change or talent with the ignition. And there is an obvious connection. When my mentor tracked his life back he can pinpoint that one event as a turning point with 100% certainty.

But such stories are rare. There are 99 other life change stories for the one that can be so easily highlighted in the media.

Developing a talent takes persistence. It is a process, not an event. You need inspiration, not ignition. Inspiration is what those talent hotbeds provide to their students. They don’t scream at them: “Become great, you bastard!” They provide zillion of little cues to inspire students to keep going, day in and day out, for years.

Ugh. I’ll stop right here. I could have ranted about ignition versus constant inspiration for hours.

Let’s go to the book’s numerous

Well, what can I say? Some people need entertainment to learn something. If more people can get to their mind that practice makes master thanks to reading those captivating stories, so be it.

The adage of ‘practice makes master’ was around for millennia. Seriously, you can track it back to ancient philosophers who lived thousands of years ago.

Yet, so very few people achieved greatness throughout human history. For centuries, we had good excuses: “Well, it’s just a theory; those philosophers/ priests/ sages are just delusional; it’s a feel-good charm; a religious blabber.” They all went down to the point that practice makes master was an idea, a conviction and might or might not have reflected the reality.

The Talent Code states it’s a biological reality for human beings. When you practice, you don’t ooze feel-good charm, but you build myelin around neurotransmitters in your brain. It’s a physical measurable reality.

All the excuses are dead. You still can act like practice doesn’t make master, but then you are delusional and act against facts and reality.

At last, practice is once and for good taken from the realm of ideas and based in biology. It’s tissue, like muscles. More muscles, more strength. More practice, more talent. It is as simple as that. Of course, there will be people contesting the reality talking about weird cases like a tiny guy who has surprisingly much strength, because he is able to activate more muscle tissue than a bigger guy next to him. But those comparisons have their limits. Put the same tiny guy against 7-feet hulk who hits the gym every day. He stands no chances. Now you can see that tissue makes the difference.

As it makes a difference when it comes to talent. The more myelin you have, the better you are at what you are doing.

3. It Applies to Complex Skills too.

While it is pretty obvious how myelin helps to make master in physical prowess like basketball or football, it is not so obvious when it comes to complex activities.

When you train in a sport, your brain fires your neurons in a closely orchestrated sequences and they are myelinated. More repetitions mean more neurons fired, which means more myelin, which leads to even faster and more precise reactions.

The CEO of Coach.me, Tony Stubblebine wrote an article on Medium years ago arguing that it is enough to stay in the business long enough to beat your competition. His company faced competitors with capital thousand times bigger than Tony’s. He stayed in the market, they disappeared. The Talent Code shed some light on Tony’s story.

Daniel smuggled in a by-the-way matter the concept that myelin is the universal component for any skill. In the book, it is clearly demonstrated by analyzing coaching skills. The coaches he described are masters. Each of them of has a different trade. They can make pretty ordinary kids into extraordinary violins, tennis players, pop singers or quarterbacks. The basic set of skills they need is similar, for example, the ability to connect at the emotional level or ultra-short feedback loops.

But the one that trains singers could not do what the one training quarterbacks does and vice versa. They myelinated a very special set of skills related to their trades as well.

Or advertising books. I run a book advertising agency. We advertise books only on Amazon. I need about 40 seconds to tell if one author’s books are worth advertising. 10 seconds look at his Amazon profile. Three 10-second looks at his three random books.

Of course, I’m sometimes wrong. But I advertised over 100 books. I fired some neurons. I myelinated them. I’m rarely wrong. Practice makes master.

I didn’t learn much about talent from this book, but I learned a lot about coaching.

I’m a coach myself and by reading The Talent Code, I realized how much more practice I need to become a master in this area. The author didn’t try to make a coaching textbook out of The Talent Code, but he did. The differences and common denominators between different coaching styles and trades were fascinating.

I still can’t forgive Daniel falling into the ‘ignition’ myth. He undid much of the good he has done with this book by beating this concept to death. Yet, the truth shines throughout the pages- everybody can become anybody. It’s a generalization and goes only as far as generalizations go, but it’s still true nonetheless.

Practice, not talent makes you extraordinary. Unless, of course, you possess the magical talent. One of the coaches quoted in the book said that he met with an extraordinary talent surpassing everyone around about once in 10 years. With how many folks does he work with a year? 100? So, it means that only about 0.01% possess a specific talent.

And remember, 99.99% of the kids who went through talent hotbeds were ‘normal,’ yet they became masters. Here comes the secret: 99.99% people out there who are masters at their crafts don’t possess this magical trait. They trained their skills to that level.

Every desire is the effort of an unexpressed possibility to come into action.
– Wallace D. Wattles

A potential for a talent is not enough to make you master. Your desire is a symptom you may be good at something and it’s a guarantee as well. Desire will keep you practicing long enough, so you become a master.

For me, The Talent Code was no big discovery. Of course, practice makes master. Of course, there must be some biological mechanism supporting this process.

And no, I don’t need to understand this biological process to make use of it.

How many of us understand the biological processes behind our sight? Very, very few. Yet, except for people who are blind for that or other reasons, we can use our eyes to see. Comprehension is not necessary to leverage the biological mechanisms.

It’s the same as with using electricity or gravity. How many of us can recite the three laws of gravity? Yet, none of us spontaneously levitate. How many of us truly understand how electrons travel inside the cord? Yet, when we flip the switch, the light bulb generates light.

Practice, and you will become a master.

Unfortunately, in our culture, we made talent magical. For us, it’s fate, not biology. The ‘ignition thinking’ is common – that something awesome or horrific must happen to us to ignite our determination and stick with practice till the mastery level – replacing common sense. The media is full of prodigies’ stories or ignition stories and very little attention is paid to perseverance stories. They are not shiny. They are downplayed.

The Talent Code is a great book to rob you of this flawed thinking. It clearly demonstrates that greatness is a matter of practice, not talent. Or, as Edison said:

“Genius is one percent inspiration and 99 percent perspiration.”

This book gives you the inspiration to dedicate to perspiration.

This is awesome book. Take the cons I mentioned into consideration (inspiration, not ignition!) and you can leverage The Talent Code to achieve greatness.

I truly believe that the quotes below tell the truth about humanity:

We are myelin beings.
Myelin is made out of love.