The Ride of A Lifetime Book Review

I usually start my reviews from the CONs, but there is little to be choosy about here. 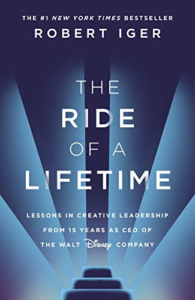 The only drawback is there are not a lot of business lessons in the book. It’s a great read, but I have only 11 highlights and notes. So, I didn’t learn a lot.
Oh, and despite all the challenges, the whole story felt a bit lukewarm. Maybe Mr. Iger always calls every a**hole a “strong personality”, or maybe he is just nice to the core? Well, it didn’t feel very authentic.
On the other hand, maybe life in the 0.01% earners in the world is so nice, how would I know?

“The Ride of a Lifetime” reads amazingly well. I wolfed it.
It reads like a fast-paced thriller, but a one that actually happened and described from the first-person perspective.
My guess is Mr. Inger had a world-class ghostwriter

If not, then hats off to him; he would probably made more money as a writer than the CEO of Disney.
I haven’t enjoyed a book to this degree in a long time. I read it like I read the best fiction- almost in one sitting, and putting my whole life on hold to finish the book.

2. A Sneak-Peek into the Billion-Dollar World.

I’ve lived on this planet over 41 years and I haven’t bumped yet into a person who earns billions of dollars, or the one who signs billion-dollar deals. This book was my next-to-best experience.
I appreciate the author let me into his world and showed me around a bit. Steve Jobs, George Lucas… Now, I feel like I interacted with them.

“The Ride of a Lifetime” reads like a thriller, sprinkles some celebrity’s names along the way, but it still is a business book.
My takeaways were few and far between, yet each time they were significant. Let’s go over a few of them:

“Don’t let your ego get in the way of making the best possible decisions.”
We are emotional beings and most of the emotions are related to our ego. It’s enough to just take a step back and assess the situation to notice extraordinary solutions.
It applies as to life decisions as aptly as to business decisions.

“Long shots aren’t usually as long as they seem.”
You never know until you try. NEVER!

“What people think of you, they will think of your company.”
It was the hurdle between Disney and Pixar in the first place. The two CEOs didn’t think of themselves too high. So, there was no space for doing business. The shift of the relationship was possible only with personal changes.

“Each deal depended on building trust with a single controlling entity.”
Well, in plain English: with a single person. Relationships are paramount in business. In fact, it’s 80% of the business. And the fabric of each relationship is always mutual trust.

And a couple of lessons from between the lines:
1. “Stay humble; be persistent.”
Just being humble and making decisions with a clear head would’ve been worthless without perseverance. The grit of Robert Inger demonstrated throughout his career is simply superb.

2. “Emotions, emotions, emotions.”
When the author described the biggest deals which build the power of Disney as it is now (Pixar, Marvel, LucasArts), he was all about navigating the emotions of the other man. There are some business considerations sprinkled over his narration, but the main thing was always considering the other person’s emotions.
For George Lucas, LucasArts was the legacy, not just business. It couldn’t be treated as a common business decision. Yes, Inger had to consider the financial aspect, but even the price Lucas obtained was the result of how much George identified with his universe than an effect of logical calculations.
Once Robert built a rapport with Steve, the deal between Pixar and Disney was almost seamless.
Emotions are paramount, too.

“The Ride of a Lifetime” is a fascinating read AND you can learn something from it in a by-the-way manner.
The insight into the lives of the most powerful people in the world was the icing on the cake.
During my lecture, I really liked the author as a person. Reading his story I appreciated how he found a balance between remaining a human being and becoming the top corpo official at the same time.

The post The Ride of A Lifetime Book Review appeared first on ExpandBeyondYourself.