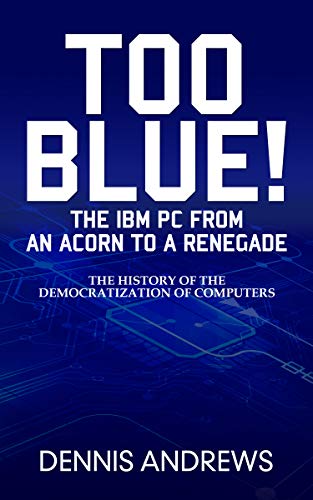 I liked this book a lot. It was a quick read, full of facts, with the right amount of personal perspective, and overall good entertainment, mind training, and a history lesson.

But very few books are perfect, so traditionally I’ll start with some…

IBM PC was an enormous project, with dozens of people involved in it at just the very top. In his attempt to give credit to all of them, the author dropped on a reader a massive number of names. And he did that next to dropping on us, poor readers, dozens of acronyms, functions, and some technical jargon.

Well, Dennis Andrews made a nice attempt to mitigate the sheer amount of knowledge dumped on readers. He provided the index of persons at the very beginning of the book. It didn’t help me one bit.

On the other hand, I was able to follow the storyline, and I remembered the key characters, like Sparky. So, the long list of names was confusing, but not fatal.

I would prefer if the author focused just on his personal perspective or seriously expanded the whole book. I felt so many threads could have been explored in more depth. The most frustrating thing was that they were signalized in the book, the author gave them a paragraph or a page of thoughts… and that was all.

I can see this book thick as a roof beam, exploring not only the history part of the project but also all ‘what-ifs’ and scenarios that were left on the table.

Nonetheless, I broke through the flood of names, survived half-finished (or just hinted) subplots, and enjoyed the read. I graduated from a technical high school with the title of an IT Technician. I studied IT. I got my first computer around 1993. My father bought this machine from his factory through half-official channels. Since Poland had been about 10 years behind the world at that time, my comp’s specification was not much different from the first machines produced by the Acorn project.

I understand what ISA, RAM, processor, mainboard, hard drive, and floppy disks are. I still like DOS operating system better than Windows.

I wolfed the book with pleasure. For me, TOO BLUE!’s pros outweighed its cons by a long shot. Let’s go to them.

It is not so common to be able to get the inside perspective into an enormous project with global implications. Even the half-chaotic personal perspective of a single executive in the project gave me so many points to ponder!

And of course, as an IT guy and PC lover, I loved the history behind the book.

TOO BLUE! has made me think and ponder over so many different things. I think this is the book’s strongest asset.

Or how Dennis repeated time after time how they never truly understood the impact of personal computing on the world. They were just busy doing their thing and chasing the demand. Personal computers revolutionized business, accelerated globalization, and created the foundation for the World Wide Web.

-How incompetent big Corpo is.
IBM PC was a huge success because it acted like a startup. They ignored the corporate red tape. Well, not a small part of this success was that they had the comfort of both ignoring the red tape and tapping into the vast resources of the global corporation.

Money was the least of it. They had manufacturing facilities. They had the talent pool not available for any startup in history. But why am I talking about incompetence? The Vmail story. First, the morons at the top had no clue about the vital system of their own company. Second, they wanted to shut it down as soon as they discovered its existence.
*facepalm*

-How US-centric is the US population.
In the beginning, they didn’t even care about the worldwide distribution. If not for Dennis, who pushed to orchestrate the overseas distribution, who knows how the history of the world would have unfolded? Mind-blowing!

The US population is less than 5% of the world’s population, but Americans think of themselves as at least 80% of the planet’s inhabitants.

-The butterfly effect.
Well, in this case, it was more of a “Godzilla effect.” The IBM PC project was by no means small. Yet, Dennis alluded many times that they had no clue what kind of worldwide avalanche they would start. There was no vision. There were no plans for changing the world. IBM just saw the opportunity to make more money. They did. But they changed the whole world in the process.

Personal computers introduced global disruption into the way business had been done. This disruption prepared the ground for many others disruptions which followed. Each and every software company which is worth billions now could have been built only because there is a personal computer in every household (or just enough of households; and don’t forget our phones have now much more computing power than the original IBM PC). Whole industries were built at the foundation of PC (like the video game industry; in Poland, the 4th biggest company at the stock exchange is CD Projekt, the creator of the Witcher and Cyberpunk games).

-Complexity.
It was eye-opening to see how many moving parts were involved in creating this project and making it a success. It was enormous! Manufacturing was a challenge in itself! But to manufacture those machines, you needed first to design them. Distribution was crucial and practically non-existent before they started the project. The same goes for support channels and procedures.

They needed to build everything. From scratch. At once.

It was amazing to see, even unfolding in hindsight.

-Open architecture.
Cooperation was the main reason IBM PC became such a success.

IBM just couldn’t build everything on its own. They needed cooperates and contractors. Their competition actually helped them to grow their business. And the domination of IBM started to fade when they decided on the solutions perceived as anti-open architecture.

TOO BLUE! is a great read. I especially recommend it to early PC adopters who remember those times and those interested in business history and global disruption.

The post TOO BLUE! Book Review appeared first on ExpandBeyondYourself.