4 Proven Ways to Change Your Life (Two Are Really Easy!) 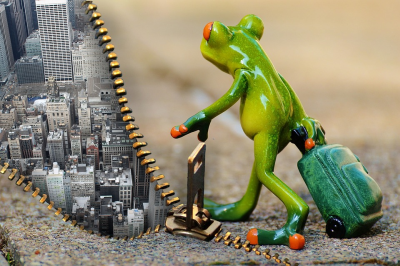 I’m fascinated by the topic of changing one’s life, because I changed my own and I help others to do the same. I found the most convincing methods set out by BJ Fogg, a head of Persuasive Lab at the Stanford University. The guy spend over two decades researching how humans change their behaviors and he found three ways to change your life:

I also found the 4th way which is kind of shortcut.

You can use any of them to change your life, but they are not equal. Let’s analyze them one by one.

#1 Way to Change Your Life: EPIPHANY

We know plenty of stories of people who experienced a sudden epiphany and revolutionized their lives. This path is tempting. A light bulb emblazing over your head and you have everything figured out.

The trouble with enlightenments is that they are hard to curate. In fact, it’s close to impossible to engineer a true epiphany. You can practice spiritual disciplines or take psychedelic drugs for years and still a life-changing enlightenment will elude you.

So, it’s great if you get an epiphany, but it’s a poor strategy. You may pursuit enlightenment your whole life and never really change your life.

#2 Way to Change Your Life: ENVIRONMENT

It’s a pretty decent strategy… if you can use it. When I decided to change my life I was 33 years old, I had been married for 12 years, had three kids, a day job in a big media company and 35-year mortgage to pay off. I wasn’t in a position to introduce any rapid and significant changes into my surroundings.

Change of environment doesn’t come easy. It’s usually connoted with big changes in our routine: a death of someone close, getting married, changing jobs, graduation, a birth of the first kid, buying a house, moving to another city, state or country… It’s not something you can engineer often and not something you can take lightly.

The awesome thing about this strategy is that it robs you out of the most of your old patterns. The more radical the change, the more it affects your daily routine. It is one thing to change job in the same town between competing companies and totally different to start a new position in a faraway city.

The not-so-good thing is that whatever change in your environment you introduce, you are still yourself. You may neglect all the new external influence and stay the same.

#3 Way to Change Your Life: HABITS

According to BJ Fogg, this is the most reliable strategy. I fully agree with him. For the first 22 months of my life transformation there wasn’t a single change of environment in my life. I had the same family, the same job and lived in the same flat.

After 22 months we bought a house and moved into it after another two months. My commute routine shifted slightly. The next external change took another year. I changed jobs.

But in the same timespan I developed dozens and dozens of new daily habits. My daily routine changed dramatically.

Why BJ Fogg talks about “baby steps?” Because according to his research, most people are incapable of changing their habits in any other way. The pitiful 9% success ratio of New Year’s resolutions makes a pretty solid supporting argument for this thesis.

I guess Fogg is right. Expert after expert says that developing more than one new habit at a time overwhelms most of people. We also have this stupid tendency to start something really strong, burn out and quit quickly.

BJ Fogg also invented a way to develop habits without a fail called Tiny Habits. According to the definition, they are something:

In my experience, points #1 and #3 are crucial, but not #2. I developed multitude of habits very fast, because I aimed for daily habits and they were relatively effortless for ME.

For many people studying the professional documentation about database administration it’s something between black magic and reading in foreign language. But I had already had over 6 years of experience in that area. It wasn’t a pleasure for me, but I could force myself to do that for 10 minutes a day (not 30 seconds).

Creating a daily habit is like 10 times easier than a habit you perform six days a week. When there is no gap in your streak, consistency comes more natural and faster. It is also stickier.

And you need to adjust the difficulty level for your abilities. In 2012 I adopted a habit of doing a consecutive series of pullups to a failure point. It “required little effort” for me.

For the previous six years I had been doing a consecutive series of pushups to a failure point, and believe me, it’s much more difficult. When you do pushups your lungs and heart give up before your muscles do.

Pullups? Even now I cannot do them longer than for a couple of minutes. When I finish doing pushups, I feel like I’ve just gone through hell. In case of chin-ups only my arms’ muscles protest loudly.

#4 Way to Change Your Life: SHORTCUT

Only about two years ago, despite two decades of research, Dr. Fogg admitted that he didn’t pay enough attention to a social aspect of developing new habits (and changing oneself). If your closest social circles actively oppose your life change, your chances decrease rapidly. If you have a social support for your change, your chances rise disproportionally high.

I drove my wife crazy with all the changes I adopted. She scorned and derided me for everything I wanted to accomplish. Less than a month into my author career she sent me an email saying that my books are no good, I should rather find myself a better job. She also added a few curses and invectives for “balance”

The shortcut for a life change I practiced and recommend is spending time with people you want to be like.

I survived my wife’s foul moods, because I found a different source of social support. I met online new friends and spent time with them.

Dr. Dunbar, an English anthropologist, discovered that humans include only about 250 people into their internal circle. He supposed that that was an average number of the tribe members in prehistoric times. But he was most blown away by accidental discovery – we can allow into our internal circles even superficial entities like brands.

The more so, we can allow into this internal social circle real people who we know only through books, videos and audio. The man who had the most influence in the early stage of my life transformation was Jim Rohn. I discovered him three years after his death, but I consumed hundreds of hours of his videos and audio programs. He became my virtual mentor. He was the main reason I didn’t give up.

You can do the same – follow someone online and consume their materials to the point when they become “real” to you, a part of your internal “tribe.”

If You Want to Change Your Life…

… focus on changing your habits. I wholeheartedly recommend the Tiny Habits course. It’s free and takes only a tiny amount of your time during a single week, yet it will teach you all the basics about habits development. What is more, the course is practical, so you’ll also immediately put this knowledge into practice.

If you want to explore habits development beyond tiny size, check out my Infallible Framework for Habit Development.

To accelerate your progress, habitually spend time with people you want to be like. The awesome thing is that nowadays you can do it via online means with practically anybody. They can even be deceased and still provide an immense influence on who you will become.

The post 4 Proven Ways to Change Your Life (Two Are Really Easy!) appeared first on ExpandBeyondYourself.