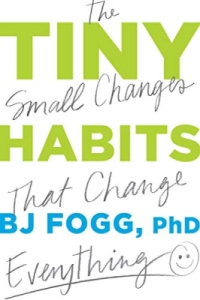 This book is VERY good. One of the best nonfiction books I’ve ever read (I’ve lost count, probably over 1,000 books).

It doesn’t change the fact that there are some cons, and as usual, I’ll start with them.

The main con of the book is a piece of absolute, utter hogwash that simply doesn’t fit this awesome book. One of the chapters is titled “Emotions Build Habits.”

In the very same chapter there is a sentence:

“For too long people have believed the old myth that repetition creates habits.”

BJ Fogg champions the idea that your attitude is more important than consistency. And he does it in an ugly style, which is another con.

I know where he comes from. Millions of people have forced themselves to follow some diet for a month or a quarter-year, and then they abandoned it and never came back. Repetitions alone don’t create a habit. But tens of millions of people have felt very excited about changing their habits, didn’t force themselves, weren’t consistent, and ended up without a habit in the exact same way.

In fact, Fogg contradicts himself, teaching his readers in the next chapter to rehearse their tiny habits. If repetitions don’t build a habit, why rehearse? You should just “feel good” about the idea of having a habit and it will magically form. Sheesh!

I found an ideal sentence describing what the author meant, the one which I agree 101% with:

This is the main focus of this chapter, and deriding repetitions, tracking, and streaks was a huge mistake and throwing the baby out with the bathwater.

I don’t think any author is free of this. BJ Fogg’s ideas are truly brilliant, but stating some utterances like they are dogma tickles me in a bad way.

I noticed it only once in the book, but it left a foul taste. It was in the fragment about repetitions:

“Some of today’s popular habit bloggers still talk about repetition or frequency as the key. Just know this: They are recycling old ideas. They have not done groundbreaking research.”

Throwing the baby out with the bathwater and pretending it’s a good thing to commit.

First, this paragraph was totally unnecessary. Second, in my ears “groundbreaking research” equals inerrancy and people who haven’t done such research are inferior. How come?

Those “popular bloggers” don’t just spill their words on the internet. They write from experience. I’ve coached over 100 people in habit formation, and I did it according to BJ Fogg’s model. Repetition works. Period.

Then you can add some qualifiers: that it doesn’t work alone or that if your emotions are working against you it’s very hard to create a habit despite repetitions.

But in general, repetitions work, hence the author’s own advice to rehearse your habits.

Don’t get me wrong. You may think after this con that the author is some kind of self-righteous monster. That’s far from the truth. BJ Fogg is an awesome guy. I’ve been following him for years.
His accomplishments are undeniable.
He has great bragging rights.

I simply say belittling others is not his style and it doesn’t fit this awesome book. The same with fighting timeless concepts that have been proven to work in practice countless times.

This is my biggest takeaway from the whole book. I bought Tiny Habits to repay BJ Fogg for his awesome job.

I’ve already studied the concept of tiny habits. I went through his free course with success. I’ve been writing about his concepts for several years. Apart from very interesting stories about the author and his clients and students, there was nothing new in the book for me.

Except for the celebration, that is.

I mean, when I did the Tiny Habits course a few years ago, I read about celebration and I discounted it. I never truly implemented this element into my habit development or my coaching. Big mistake.

Why did I put it as a con? Because it’s articulated in the book only halfway into it!!

What is more, the author is clearly aware of the importance of featuring this tip:

“I would train you in celebrations before teaching you about the Fogg Behavior Model, or the power of simplicity, or Anchors, or recipes for Tiny Habits.”

BJ Fogg knows it’s important. For a habit expert like me, it’s the biggest takeaway. And he hid this feature in the middle of the book.

The last con is on the publisher. English is not my first language. I’m unaware of most grammatical errors. I usually am not annoyed by a few typos here and there. I’m an author, and I know how close to impossible it is to eliminate all typos from a manuscript.

That is, until I read “bestto” in a Kindle book for which I paid almost $17! And I know that a poor author won’t get even $5 of it because he is robbed by a traditional publisher whose products are so perfect, and so above the “poor quality” self-publishers’ books (like 5x above, as their prices are).

C’mon! My word processor noticed this typo! Drop the price to a reasonable level, or do the perfect job you are paid for.

If you’ve thought for a moment that the above cons make Tiny Habits hardly readable or the book is not so good, that’s a wrong impression.

I wrote in such length about cons because I deeply care about this book’s success. It is absolutely fantastic. And here are the reasons that make it so:

It’s simple. It’s intuitive. It isn’t an academic theory, but it describes reality because it is based on observations more than on ruminations.

The chart of the model and several sentences explaining how it works are worth the price of the book, and the typo be damned.

2. Covers All the Angles

Tiny Habits tells the whole story of habits, from underlying principles of repeating the behavior to breaking bad habits and group cooperation in developing new habits.

This is the MOST complete book about habits I’ve read, and I read them all.

Read this book and you will learn how people actually change their behavior, why it makes tremendous sense to start small rather than big, how to grow your tiny habits into massive action, and how those small activities will result in huge results in the end.

I love this book! It says all I’ve been trying to convey to the public for years. It also says it very well. The explanations are easy to grasp. Tiny Habits is very well written. Which is the next pro…

I was totally impressed by the way BJ has woven stories of his students into the principles he teaches. I barely can tell where teaching ends and a story starts.

And all the stories are amazingly powerful. BJ has taught tens of thousands of people how to develop habits; he could cherry-pick some that make your head spin and your heart rate climb.

Until you read Tiny Habits. Utilizing the stories is at the master level here.

BJ Fogg seems to know this very well. There is a lot of iterative repetitions of everything he teaches in the book.

Yet, it’s not annoying at all. I noticed the repetition often, especially in the charts and images illustrating the process, but it didn’t bother me one bit. I’m impressed.

I hate the guts of most traditionally published books. They are bland, tailored to speak to a general audience, and…bland.

Tiny Habits is not so. The author wasn’t castrated out of his voice. BJ Fogg shares in by-the-way matters that he is gay at the very beginning of the book. He shares plenty of smaller stories from his life related to habit building and behavior design. I enjoyed those tidbits a lot.

But he also shares the deeply personal story of his nephew’s suicide and his family dynamics.

So, a reader can not only learn from practical applications of his model and tiny habit framework from his example, but can relate to him on a personal level.

Tiny Habits is a lot of things, but it’s not bland.

Another unique trait of Tiny Habits is that it teaches how to create new habits in a group setting—in a family, company, or team. In the same methodical way in which the author explains how to build individual habits, he also explains how you can help others change.

What is more, he describes two paths: the path of a Ringleader and the path of a Ninja. The Ringleader is a person with the authority to lead others (father, CEO, manager, coach, and so on).

But when people resist the change despite your formal authority or if you are not a person in power, you can still help others by walking the Ninja path. Which, by the way, I found very helpful. Most people hiss at the sound of the word “change” like a devil at the sight of holy water.

Tiny Habits is so good that I cannot properly articulate it. Just ignore the one idiocy that emotions build habits and repetitions don’t, and you can absorb the rest with your whole mind and soul.

This is the book that explains everything about habits.

This is the book that teaches you the simplest system.

This is the book that makes your personal changes not only possible, but totally doable.

This is the book that inspires you to take bold (but tiny!) action.

This is the book that helps you feel successful from day one.

This is the book.