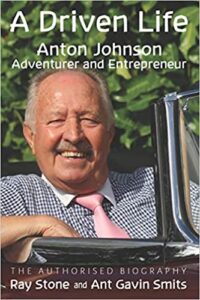 Midas Touch – This is how this book should be titled. My head spins when I try to recall how many successful businesses this guy started, and how many struggling businesses he helped. Granted, he had a quite few decades to accomplish this feat, but still… That was incredible.
The whole read was very enjoyable and inspiring. However, there still were some

1. This is an authorized biography.

You cannot really say anything bad in a book about a man who must approve its publication.

I’m not saying that Anton is an evil monster who hired a couple of mercenary pens to whiten his story. I’m almost certain, that he is quite a nice fellow. But this is not a 360-degree, full story. Maybe 280-degrees, maybe 333-degrees, but not the whole story, despite the authors’ best effort to paint it that way.

Anton is hardly a role model. His first marriage fell apart because it was never his priority. He chased money. He was active in charitable endeavors. He simply didn’t have time for his family.
But in my world, “I don’t have time” spells “It is not a priority for me.”

There are people who have both happy families and successful businesses. It can be done, but not by making your business a priority.

Testimonials from his daughter from the first marriage, saying how great of a dad he was, seemed a bit strained for me, but maybe I’m just cynical (see Con #1).

He managed better with his second family, but I mostly credit his wife for this success. Jan has been a gal who always relentlessly supported Anton, no matter what. She was ready to sit home alone and raise kids. She followed him wherever he went. Anton needed such unconditional love to make his family work.

Having said all the above, I don’t think he was an especially bad father and husband. He divorced his first wife without drama. He helped her and supported his kids after the divorce.

He made a second family a lasting one. He helped kids from the first marriage to get a head start in life. He trained almost all of his children in the art of business.

Anton did what was expected of a man in his generation: he supported his families and supervised his children as they stepped into the world of adults.

The presence of those cons doesn’t mean the book is awful; not at all! I simply wanted you to know it’s not all roses. But, there are plenty of “roses”, so let’s talk about

I’m utterly impressed by this man. Anton started multiple successful businesses. That’s a feat in itself. But he also sold most of them, which means he built relevant systems and processes, so someone else could run the shop without him. It wasn’t his pure charisma (however undeniable) that allowed him to build those businesses. It was also business acumen and leadership skills.

But his Midas touch is just the tip of the iceberg. His ability to reinvent himself was nothing short of spectacular.

I was impressed by his ability to work hard.

Anton had already been highly successful before immigrating to the USA. He owned many businesses and the sports club (well, a few of them!). In the US, he became a janitor. He hustled in that position for six long months before his situation improved.

Also, it wasn’t like those previous businesses were handed to him on a golden plate. He started his career in his parents’ butcher shop. Cleaning floors were nothing compared to cleaning the leftovers in a butcher shop.

When he began in management, in one of the family’s shops, there was some resentment from his coworkers who treated him as the “boss’s son”. When Anton had enough, he resolved this conflict with his fists.

When he was a teenager, he became a professional rabbit-hunter in the New Zealand wilderness. He had to learn horseback riding on his very first day on the job. In a few short weeks, he learned everything and could replace the man who hired him.

Anton has certainly had a more colorful life than most of us. From his reckless youth to life as a serial entrepreneur, he has had plenty of adventures and meets some pretty famous people. He had tea with Margaret Thatcher!

I didn’t recognize 90% of names he dropped in the book – names from sport, music, and the movie industry (oh, by the way, Anton also played in a movie!), but I know Johnny Depp. Anton hosted Johnny in his Caribbean restaurant (yes, Anton had a restaurant on a Caribbean island).

Reading this book was like watching a colorful kaleidoscope, always in motion, always showing something new and fresh. One thing is sure, you will not get bored by “A Driven Life!”

I laughed out loud more than a few times reading the book. Not only has Anton had an adventurous life, but the authors were also able to recount some situations in just the right words. I laughed like a drain when reading about Anton’s encounter with a bull. That was beyond hilarious!
And it wasn’t just a single event. I laughed regularly.

Americans, whenever you see “football” in the book, read “soccer.” Anton was an owner of an English soccer club.

I believe every single allegation and allusion the authors threw at his enemies. I’m from Poland, and we have had our unfair share of corruption in soccer.

Well, soccer is a small potato next to the fact that after the collapse of communism, when the dust settled, half of the country was owned by foreign capital. In Poland, we have grim jokes about a “serial suicide.” When people asked too many questions about this massive ownership transfer, they suddenly “committed suicide.”

Thus, reading how Anton had been attacked was no shock to me. If you ask me, he was lucky! The serial suicide didn’t visit him and he went away with his health intact and even the leftovers of his fortune. Lucky guy!

Big money is merciless and greedy people don’t mind the collateral damage. Destroying a reputation and the life of one guy? They didn’t even notice the bump in the road.

I honestly hope this book will be a wake-up call to the football (read: soccer) community in the UK. Nobody should be treated like Anton had been. Nobody should use media and public services (police) as their thugs in their quest for more dirty money.

Anton’s business acumen is at the prodigy level. But I admire him most for his very human trait – resilience.

This guy lost everything more than once and always bounced back.
He lost a fortune, and his soccer club and his reputation were besmeared. He immigrated to America and in less than a year he was an owner of a 7-figure business.

He lost his business in the US due to their moronic immigration laws. He went back to the UK and started some more businesses.

He lost his shares of his last soccer club in a legal battle that consumed almost all he had. He took over a Caribbean restaurant and turned it into a booming business.

“You just can’t beat the person who never gives up.” – Babe Ruth

Hats off. Anton survived more blows than an average Joe could take. The man got up after each blow, like a boxing champion, with vigor and renewed energy to tackle the next project.

6. Helplessness of an Individual Against Big Money.

Anton is not, nor ever has been, an average Joe. His parents owned a successful business. As a teenager, he traveled around the world. It was hard, practically impossible for me to relate to him. When I was a teenager my parents struggled to come up with $100 a month so I could study in a high school out of town.

However, I could relate to Anton in his helplessness, when big predators took him for a target. Despite all of his famous connections, despite his money, which 99% of this planet’s inhabitants of this planet would never see in their lifetime, he was still as helpless as any average Joe against thugs with money who knew how to manipulate the legal system.

BTW, isn’t it frightening that you can be sued out of your property in a civilized country, even an extravagant property like a soccer club?!? Anton paid money and bought shares. How the heck could anybody even imagine suing him out of those shares?! It’s like stealing in the courthouse your groceries, just on a bigger scale.

When media were chasing after him day and night, when police dragged him out of his business in bright daylight, when Anton could do nothing else but waste his money on lawyers – he was exactly like you and me. Helpless, when the system we live in turns into a grinder.

Thanks to this, I can admire his very human and all too rare quality – resilience.

So, I was impressed by the guy. Who wouldn’t be? His adventures were wild, to say the least.
But I was even more impressed by his extraordinary resilience.
I recommend “A Driven Life” very much. You can find her business lessons, life lessons, adventures, hilarious events, heartbreaking failures, big names, crooks, and everything between. What a ride!