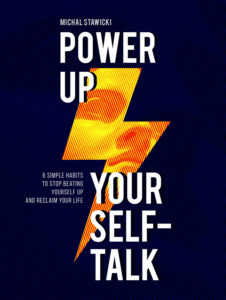 There is very little “self” in self-help. I already said that self-help is a big fat lie.

However, there are still areas where outside help can do very little for you. Self-talk is the most important of them and I tackle this problem in my next book, “Power up Your Self-Talk: 6 Simple Habits to Stop Beating Yourself Up and Reclaim Your Life.”

But what is self-talk?

“When we tell ourselves something is too hard, or easy, or that we are successes or failures, it’s self-talk.”

You are familiar with this voice in your head, this is a universal human experience. Unfortunately, it rarely says good things, especially about you. It hinders your progress like nothing else because it’s preventive in its nature. You don’t change because in 99% of cases, your self-talk convinces you to give up even before you start.

You read a self-help book that recommends doing some exercise and you think: “Later”, “It’s stupid”, “That surely will not work for me”, “I’m too stupid for that”, “It’s such a hassle.”

And you skip the exercise. That’s why, despite the countless self-help volumes guru’s readers’ success is not very common.

The authors of self-help books kind of know this problem, but they choose to ignore it. What can they do about it anyway? Sneak into your mind and say something else? They just hope the seed of their message will fall onto receptive soil.

Self-help books bombard you with a great advice: “Imagine that…”
“Tell yourself…”
“Ask yourself…”

The advice is completely useless, because it tries to break into your habitual self-talk. You don’t really know how self-insults appear in your mind. You don’t know where the damaging questions (“Why am I such a failure?”, “Why does it always happen to me?”) come from. You cannot stop yourself in the middle of your self-tirade and say something else instead.

Why? Because self-talk is one of your most ingrained habits. I’ll picture its power by comparing it with walking.

You Think. You Walk.

If you are a reasonably healthy human being, you don’t give even an ounce of conscious attention to your steps. You just walk.

Of course, you can break down the whole process into smaller parts. When you walk, you raise your leg a bit, bend a leg at the knee joint so your foot won’t touch the surface, lean forward just a tiny bit, move your left arm, lift your right arm- both synchronized so you keep your balance, move the leg forward, put the foot on the ground, move your center of weight and support your weight on the lead foot. 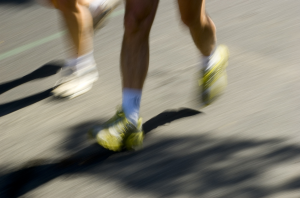 Changing how you walk is possible, but extremely hard. You will fall back into your old walking habits as soon as your attention gets away from conscious control over your movements. You can steer your self-talk in the same fashion in which you can control your steps. In theory, it’s pretty simple. In practice the power of habit will always win and you fall back to old patterns.

Those good tips from self-help books are like advice to raise your foot a bit higher, bend the knee harder or take bigger steps. They may work in isolation and when you put your whole attention on implementation. They try to affect your thinking patterns, which are already firmly established. In fact, your thinking patterns are fossilized.

It’s easier to start a new habit than to modify an existing one. And removing an old habit is downright impossible. They are hardcoded in your brain. Besides, removing your self-talk altogether is not possible. It’s one of the things that make us human. You also cannot replace self-talk with some new habit.

Improving of your self-talk, as hard as it is, is the only option.

And I can teach you how to do it. In fact, I have four times more chances to teach you this skill because I’ve been there and I’ve done that. My self-talk was crappy. I insulted myself habitually. My self-esteem wasn’t even so-so. I had a negative spiral in my life.

I thought badly about myself, I thought I’m a failure and that prevented me from taking any action. Why bother? I was a failure, so I would failed again. With no action no improvement could happen in my life. So my life was getting worse and my self-talk gathered more ‘evidence’ that I was a failure.

But I turned my life around and I turned it by taking action, not by talking to myself. Well, I thought so. Anyway, my self-talk is definitely better now than it was six years ago. I modified my inner conversation from the very beginning, I just wasn’t aware I did.

I reverse-engineered what I was doing that caused a shift in my self-talk.

First, you need to start feeling better. Crappy self-talk beats the crap out of you. Or rather, it beats the crap into you, so it stays there ready to emerge every time you want to do something outside the status quo. Thus, for the most of the time you feel like sh*t. No wonder, if you say to yourself things like:

“You worthless piece of sh*t!”

There is little sense in trying to change your life, if you feel beaten to death all the time. You need some habits that will bring sunshine into your internal world. 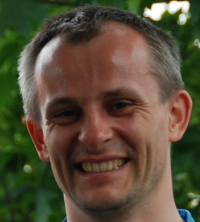 Then, you need self-awareness. A sh*tload of it. The grip of your self-talk over your life is so strong mostly because you don’t even notice it. It’s like those elephants which were chained as a puppy. They learned that chain constraints their movements and they stopped trying to free themselves. Later on the powerful animals don’t even try to break from a thin chain.

A lot of your self-talk comes from your childhood and adolescent years. You were weak, vulnerable and not used to using your rational mind to solve life problems. Later, as an adult, you don’t even notice that your childish self-talk keeps you in captivity.

Hence, you need a few habits that boost your self-awareness. You need to notice your self-talk to be able to do something with it. This is where most authors and coaches fall. They give you advice that you are not able to implement. I’ve just listened to a podcast with a top psychiatrist. He advises people with depression to stop when they feel sad, overwhelmed or disappointed with themselves and analyze their thoughts: Is this even true? Is this always true? Why do I think this?

The problem is those poor folks aren’t aware when they feel sad, overwhelmed or disappointed with themselves. It’s their default state! They have no idea WHEN to stop the vicious cycle of self-beating that goes on autopilot.

You need to practice simple habits, easy to do, day in and day out, which will bring to your attention to what’s actually going through your mind. Only then you can stop and challenge your thoughts.

Power up Your Self-Talk

Once you do something to elevate your mood and gained some self-awareness, you can actually do something with your self-talk. One of the most prevailing thoughts at the beginning of my transformation was “It’s impossible.”

There are also other methods that work on a more subconscious level, like gratitude journaling.

And once you start doing something about your negative self-talk, once it’s improving, your whole life improves.

…and Reclaim Your Life

I learned how to temporarily boost my mood often. I became more self-aware of what was going through my mind on a daily basis. At last, I started responding differently to my offensive self-talk.

But some results were speedy. I almost doubled my reading speed in a month. I achieved my dream weight in less than half a year.

However, the most important effect was my overall quality of life. As one review on Amazon says:

“I had no idea how much I mentally or verbally beat myself up all the time.”

I had no idea how this self-beating kept me down all the time.

I improved everything in my life. I doubled my income. I was sick only three times since July 2013. I bought the first house for my family. 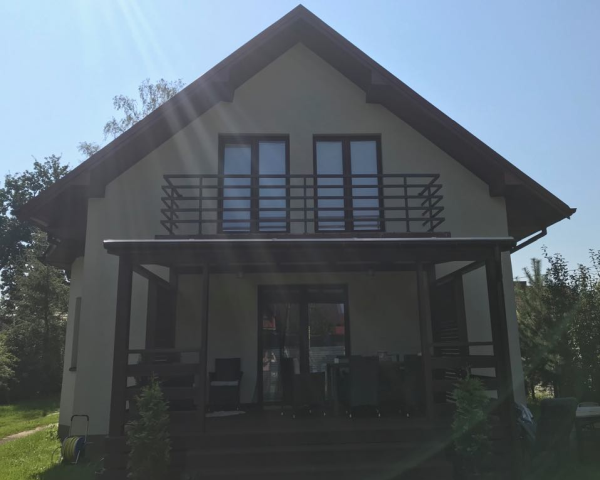 I started three successful new careers – as an author, a life coach and a book marketer. I pray about 10 times more than six years ago. I obtained a few professional certificates and changed my job getting 30% salary raise. My answers on Quora got over 5 million views. I published 15 books which sold over 50,000 copies.

All of this happened because I dealt with the vicious voice in my head.

I’m far from being a master of my internal dialog. But I significantly dropped the level of emotional turmoil in my life caused by what I tell myself. My self-talk didn’t change enormously, I still talk to myself like a drunken felon all too often. But it doesn’t hurt me as much as in the past.

And most importantly, it doesn’t stop me right in my tracks. I act. I’m above the whispers in my head. I steer the direction of my life, not the random thoughts that are bouncing inside my skull.

I want the same for you. Take action.
Sign up below and I’ll send you a notification at the book launch, so you can grab it for 99 cents.

The post Power up Your Self-Talk and Reclaim Your Life appeared first on ExpandBeyondYourself.