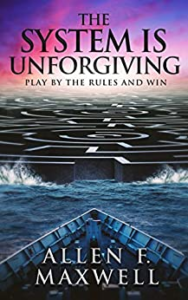 First of all, this book reads awesomely well. I couldn’t put it down despite its flaws. In fact, those flaws made “The System Is Unforgiving” so enjoyable.

So, traditionally, let’s start the review with

Half into the book I was sick of Allen stroking his ego. It seemed like he couldn’t let the chapter go without articulating how smart, hardworking, and cunning he was.

That was a bit unnerving, but definitely not enough to put the book down. I was sick of this style, yet I still wolfed the book in no time.

I guess the editor dropped a ball here. For example, when it comes to the events during the Guantanamo assignment, the narration was going in circles at least three times.

I needed to read three times how inept and stupid (comparing to Allen; see: the bragging style) his Senior Chief Petty Officer was. How despicable were the Executive Officer and the Admin Officer. How smart Allen was to work the system and get access to the Commanding Officer and the Staff Jude Advocate in advance.

Gosh! It was enough to say it once. Seriously.

Allen described at least a few times how he did something ethically questioning.

The best example was how he wrote horrible, and false, evaluations for his subordinate in the Philippines. Allen had a bunch of great excuses, which didn’t change the fact what he did, was simply wrong.

4. The System Is Forgiving.

I don’t exactly agree with the whole premise of the book; you’ll find more on that in my summary.

Yes, it’s true that one mistake can be fatal. But it doesn’t have to be. Even Allen himself admitted to multiple mistakes and still, he was able to navigate the system.

I suppose, the title Know the System and Your Life Will Get Easier wasn’t so catchy

The most infuriating points of this book make it so enjoyable! Seriously, I feel it’s so good because Allen didn’t hold his punches.

I prefer honest boasting than false modesty. Maybe Allen in real life is also a bit too arrogant for my taste. Tough luck. He didn’t try to please me with his book, he just provided his own unique perspective.

I appreciate he didn’t try to tone down his voice. Thanks to this “The System Is Unforgiving” is so authentic and reads so well.

Besides, the author had every right to brag. He was there. He did this. From his perspective, it might’ve been just a statement of facts.

I cannot say this enough… the system is unforgiving. ― Allen F. Maxwell

I found the word “system” mentioned in the book over 600 times!! The phrase “the system is unforgiving” appears 18 times in the book. And that’s terrific!

This book very skillfully tells the story and teaches at the same time. It happens exactly because of repetitiveness. The author comes back to his rules dozens, if not hundreds of times while describing particular events from his life. Normally, we remember about 5% of what we read. I’ve just made a quick experiment and I remember at least 40% of The 15 Rules of the System.

There is a method in this madness. It works.

Do you know what I appreciated the most in the book? The story from the Philippines, where Allen admits how he screwed a fellow human being and how bad he felt with that.

A friend is someone who knows all about you and still loves you. ― Elbert Hubbard

Well, telling the whole truth was a heck of a way to get some new friends. Mr. Allen F. Maxwell is a truly bold individual who doesn’t shy away from revealing all about his deeds. His level of transparency is off the charts and that’s why I still love him.

It wasn’t the only shameful mistake the author committed and described in painful details. He learned quite a lot about the rules of the system the hard way. Those were some hurtful lessons! I appreciate I could learn from his mistakes, not my own.

“The System Is Unforgiving” is utterly captivating. It took me about three days to wolf the book from cover to cover. Allen’s style is so refreshingly authentic and transparent.

I got multiple lessons ranging from reinforcing things I already knew to the hidden face of modern American racism.

The previous book I read was written by Disney’s CEO. I got 11 highlights. I have 42 highlights from “The System Is Unforgiving”, which is about the exact length. Drop mike.

By the way, it only reinforced my belief that we learn better from folks who are closer to where we are. Allen has a multimillion business and I have only a multi-thousand business. Yet, we both are still an order of magnitude farther away from Disney.

Summary: The System Is (un)Forgiving

Allen proved it in his book, and his life, multiple times. The full transparency he displayed (I cannot praise him enough for that) revealed multiple times he was in a collision with various rules of the system. For example, as a youngster, he didn’t shy away from a night club. Partying all night and coming to work in the morning? Not a very bright idea.

His first marriage was an utter disaster. Period.

When he got the first assignment in the navy, he was still young and stupid. He just never was caught in the act. The same goes true about some excesses in the Philippines.

Don’t get me wrong, he gave the system the number of chances an order of magnitude smaller to take him down than his peers; he was much smarter than his fellow marines. But still, it wasn’t like Allen never failed to follow the rules.

The same rings true with his partnerships when he started a business.

The system is unforgiving in a way that it takes only once chance, one occurrence, and you can be disposed – whether in the navy, in marriage, or in business. That’s why the integrity Allen talks about is so important:

I think this is the ultimate lesson of this book. Your character, what’s in your heart, determines in most cases the difference between success and failure.

Do the right thing when no one is looking and you cannot be caught in wrongdoing. You give zero chances to the system to crash on you.

Even if the system spits you out, you know in your heart you did the right thing and you can dedicate your full abilities to another system.

The post The System Is Unforgiving Book Review appeared first on ExpandBeyondYourself.