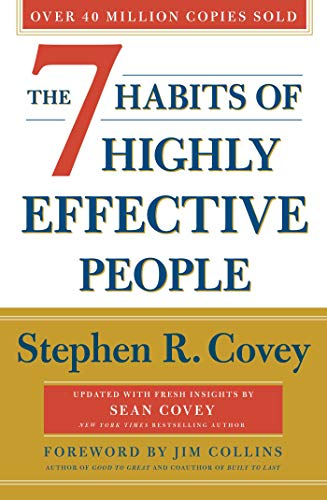 Perseverance pays off. After a few years of writing a book review every month, a prestigious PR firm noticed me. They sent me an advance reading copy of the 30th Anniversary Edition of The 7 Habits of Highly Effective People.
This edition contains a new original content by Sean Covey, a son of Stephen R. Covey; namely, the preface and additional insights after each habit.

If you want to check out what I thought of the original version of 7 Habits… see this Quora answer:
Have the 7 Habits made you a highly effective person?
(spoiler alert: I liked it a lot).

The preface from Sean contains this fragment, which pretty much sums my initial thoughts about the idea:

So when Simon & Schuster, the publisher of The 7 Habits of Highly Effective People, asked me to add my insights to a thirtieth anniversary edition of the book, I was torn. My immediate response was “No way! This book is a masterpiece. Why add anything to it?”

So, another spoiler here: The content which Sean added is a great bonus. He doesn’t pretend that he has better ideas than his father. I loved his content because of two reasons:
-it gave me additional insight about Stephen R Covey, the personal dimension of this great man;
-it nicely expands the concepts of the original book; Sean has been teaching and practicing 7 Habits for decades, so his insights are right on the spot.

Since probably everybody knows The 7 Habits of Highly Effective People, I decided to cover only the additional material in this review. Here it goes.

“And I want these principles to be taught far beyond my life span.”

Those are the words of Stephen R. Covey. Well, he definitely succeeded when it comes to this particular dream.

For me, it was a great eye-opener. As a coach, I observed first-hand how hopeless people are with changing their behaviors. Change of paradigm comes even harder, but the rewards are proportionally bigger.

This is the “self” part of self-help. You cannot help others if you don’t help yourself. Yet, so many people try to lead others without a clear vision or setting the right priorities. It’s possible because of the modern world of social media, where the public image is everything.
Yet, the same mechanisms serve to reveal how spectacular failures are born of the Public-before-Private approach.

Then, Sean enumerates the string of habits which are the opposite of the 7 Habits and conclude:

Clearly, these are not the habits we are after. But too often, we practice them because they represent the course of least resistance (me included).

This is a fine measure stick according to my experience too: if something lies on the course of least resistance, take the opposite route. It’s the high road.

From my perspective, I’d say that the most important habit is the one you’re having the most difficult time living.

Which goes neatly back to the path of least resistance.

As humans, our tendency is to play the victim.
In reality, we are not victims. We’re agents. But we have to be reminded of this all the time.

You can read the above sentences a few times to devour the deep of wisdom in those words. I’m more than seven years on this journey. I’m a coach, business owner, and author. Millions of people read my stuff. Yet, I still need to remind myself that I’m an agent, not a victim.
BTW, Sean shared a fabulous story about his father when revealed to his son that Sean was playing a victim.

We now have a great deal of empirical data that backs up everything my father wrote about proactivity back in 1989.

Sean enumerates some of them and they are the titles of the most impactful books in the last couple of decades: Mindset, Authentic Happiness, and Grit.

Sean shared a story of a manufactory company hit hard by flooding. The company followed the principles of The 7 Habits of Highly Effective People:

Observers were astonished that it hadn’t taken billions of dollars and many years to recover. All it took was a superb team willing to wade through mud for each other. That is the power of a proactive culture.

We’ve all been through difficult things—and if you haven’t yet experienced adversity, believe me, you will.

Self-awareness is the catalyst for the other three endowments. When you can stand apart from your own mind and examine it—to think about your thoughts, feelings, and moods—you then have the basis for using imagination, conscience, and independent will in entirely new ways.

Self-awareness is SO important. I’m glad Sean emphasized this. “Stand apart from my own mind” is what I did numerous times in the last several years. It’s never comfortable. It’s always disruptive. It was such a moment during my lecture of The Slight Edge which allowed a new perspective of success to sneak into my mind.

You cannot practice any of the other habits until you first decide that you are in charge.

Again, victim-agent dichotomy. Going to the behavior scale (my specialty), it’s possible to practice bad habits when you are not in charge. Then, they are in charge. But developing good habits, any of them, cries for some conscious reflection and action. You must take charge to change yourself.

And here we go back to self-awareness. If you can step into the gap between the stimulus and your action, you can be proactive. You can consciously make choices. Otherwise, you are brought down to your instincts.

At least for me. I vote for this approach.

He saw himself as a pathfinder, a trailblazer, a paradigm breaker. That was the role he envisioned: bringing principle-centered leadership to the world and unleashing human potential.

Those words tell about Stephen R. Covey. Isn’t it wonderful that he envisioned something and now, after he is no longer among us, it is realizing?

“We’re going to write our family mission statement!” A lot of moaning and groaning ensued. Undaunted, he continued…”

What a great family picture. I have three teenagers right now. There is a lot of moaning and groaning. This sneak peek into the Covey family reminded me to continue, undaunted.

“Leadership is communicating to another their worth and potential so clearly they are inspired to see it in themselves.”

A quote from Stephen R. Covey. It just touched my heart.

There is a lot more in the 30th Anniversary Edition of The 7 Habits of Highly Effective People. I won’t spoil you all the pleasure of discovering what’s new in this edition.
Sean’s experience shines through his content. For example, he added just a few paragraphs about creating your personal mission statement and they were right on spot. I wrote a small book about this subject and I intend to steal a few questions Sean provided and put them in the new edition of my book. This man knows what he is saying!

My verdict is that if anything, Sean Covey’s material only added value to this awesome book. If you know someone who hasn’t yet read the original book (a young adult perhaps?), the 30th Anniversary Edition of The 7 Habits of Highly Effective People will make a great gift. Potentially life-changing.